Changes in Canadian Identity Attitudes Over a Twenty Year Period: 1981-2001 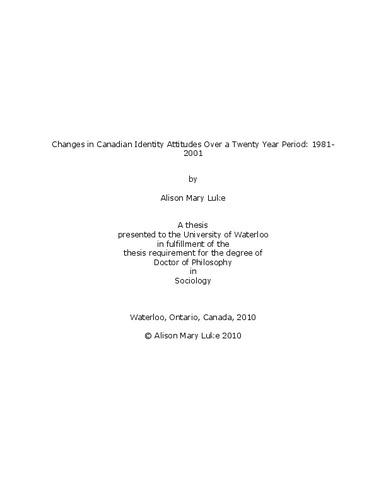 This project examines attitude change between 1981 and 2001 for a population of young, well educated Canadians, employing evaluation, potency and activity (EPA) semantic differential ratings of approximately 800 social identities. This comprises my larger data set. I also employ a smaller subset of 102 social identities drawn from the larger data set to explore changes across three points in time (1981, 1995, and 2001) for 102 social identities, supplementing my analysis across two points in time (1981 and 2001) for 800 social identities. The objectives for this dissertation are: (1) to assess stability of attitudes for social identities over time; (2) to identify and describe patterns of change in identity attitudes and to connect observed changes in identity attitudes to historical events, and to social and cultural change in Canadian society; (3) to explore the extent to which identities that cluster together in EPA space define social institutions; and (4) to explore how changes in identity attitudes affect role expectations over time. Despite significant shifts in attitudes for a number of identities, approximately 80% of identity attitudes remained stable over time, confirming findings from past research that cultural sentiments are slow to change. Observed changes could be connected to social and cultural structure. Specifically, dramatic changes occurred for religious and sexual preference/orientation identities. Numerous religious identities decreased on evaluation for male respondents between 1981 and 1995 and then were restored to earlier levels by 2001. Female respondents were not as forgiving and 1995 decreases in evaluation were sustained. These changes are connected to increased secularization and earlier sexual scandals in religious institutions. Sexual preference/orientation identities increased significantly on evaluation for both males and females. However, increases for females were more dramatic and occurred across all three points in time while changes in attitudes for males occurred between 1981 and 1995 and then changed little between 1995 and 2001. These changes can be connected to numerous factors, including the increased visibility of gay/lesbian culture in mainstream media and the absence of a strong anti-gay counter movement. Although social identities clustered in interesting ways, cluster analysis was not very successful in defining social institutions. Computer simulations revealed how role and behaviour expectations change with changes in identity attitudes. For example, there is obvious increase in evaluation between 1981 and 2001 for the behavior of a police officer toward a homosexual. This dissertation concludes by addressing methodological issues such as sample size and generalizability. It is suggested that the corpus of identities should be continually updated to include identities that are emerging from pop culture. Finally, four areas of future research are suggested: (1) a continual monitoring of cultural sentiments; (2) a more detailed focus on individual social institutions; (3) a confirmation of computer predictions with qualitative interview data; and (4) identifying the implications of this research for trend analysis. Practical implications of this dissertation research include the use of computer simulations of identity-role processes in the areas of education and policy research.