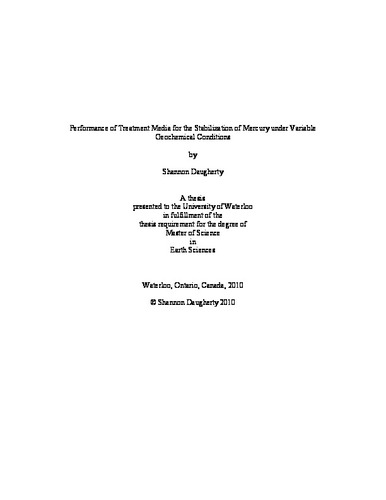 Mercury-contaminated sediments are found in many locations throughout North America and the world. Release of Hg from such sediments and subsequent biological uptake can result in biomagnification in associated ecosystems. This study focused specifically on a stabilization technique involving the addition of reactive media to the sediment matrix to immobilize Hg and reduce its bioavailability. A series of batch and column experiments was conducted over a range of physical and geochemical conditions to evaluate the propensity of a diverse set of reactive media to stabilize Hg in sediment with high organic carbon and clay content. The additives, selected to promote adsorption and precipitation of Hg, included natural attapulgite (palygorskite) clay, organically-modified clay, elemental sulfur, a strong reductant, and mixtures thereof. The results of the batch experiments indicated that addition of reactive media to the sediment led to substantially lower aqueous concentrations of Hg relative to untreated sediment. The stabilization of Hg was observed to be dependent on mass of added reagent, with generally greater treatment observed for the higher masses of reagent evaluated. Aqueous concentrations of Hg were reduced from > 800 ng L-1 in control samples to < 50 ng L-1 in treated samples for all of the reactive media at the highest mass proportions evaluated. The effectiveness of Hg stabilization using the sulfur-based blends was strongly affected by contact with atmospheric oxygen, with better treatment observed in oxygen-limited conditions. The results of the column tests showed that relatively low concentrations of Hg (< 50 ng L-1) were leached from untreated sediment, maintained under anoxic conditions, with steadily percolating water. However, increased concentrations of Hg (> 200 ng L-1) were observed in column effluent collected from the untreated sediment following flow interruption. This release of high concentrations of Hg was not observed for the columns containing treated sediment after stagnation. Particularly low Hg concentrations were maintained in effluent collected from the sulfur-based treatment mixtures (< 40 ng Hg L-1) for the entirety of the experimental duration, regardless of flow perturbations.