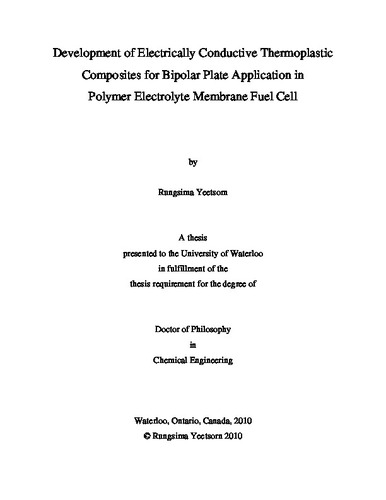 Polymer electrolyte membrane fuel cells (PEMFCs) have the potential to play a major role as energy generators for transportation and portable applications. One of the current barriers to their commercialization is the cost of the components and manufacturing, specifically the bipolar plates. One approach to preparing PEMFCs for commercialization is to develop new bipolar plate materials, related to mass production of fuel cells. Thermoplastic/carbon filler composites with low filler loading have a major advantage in that they can be produced by a conventional low-cost injection molding technique. In addition, the materials used are inexpensive, easy to shape, and lightweight. An optimal bipolar plate must possess high surface and bulk electronic conductivity, sufficient mechanical integrity, low permeability, and corrosion resistance. However, it is difficult to achieve high electrical conductivity from a low-cost thermoplastic composite with low conductive filler loading. Concerns over electrical conductivity improvement and the injection processability of composites have brought forth the idea of producing a polypropylene/three-carbon-filler composite for bipolar plate application. The thesis addresses the development of synergistic effects of filler combinations, investigating composite conductive materials and using composite bipolar plate testing in PEMFCs. One significant effect of conductive network formation is the synergetic effects of different carbon filler sizes, shapes, and multiple filler ratios on the electrical conductivity of bipolar plate materials. A polypropylene resin combined with low-cost conductive fillers (graphite, conductive carbon black, and carbon fibers with 55 wt% of filler loading) compose the main composite for all investigations in this research. Numerous composite formulations, based on single-, two-, and three-filler systems, have been created to investigate the characteristics and synergistic effects of multiple fillers on composite conductivity. Electrical conductivity measurements corresponding to PEMFC performance and processing characteristics were investigated. Experimental work also involved other ex-situ testing for the physical requirements of commercial bipolar plates. All combinations of fillers were found to have a significant synergistic effect that increased the composite electrical conductivity. Carbon black was found to have the highest influence on the increase of electrical conductivity compared to the other fillers. The use of conjugated conducting polymers such as polypyrrole (PPy) to help the composite blends gain desirable conductivities was also studied. Electrical conductivity was significantly improved conductivity by enriching the conducting paths on the interfaces between fillers and the PP matrix with PPy. The conductive network was found to have a linkage of carbon fibers following the respective size distributions of fibers. The combination of Fortafil and Asbury carbon fiber mixture ameliorated the structure of conductive paths, especially in the through-plane direction. However, using small fibers such as carbon nanofibers did not significantly improve in electrical conductivity. The useful characteristics of an individual filler and filler supportive functions were combined to create a novel formula that significantly improved electrical conductivity. Other properties, such as mechanical and rheological ones, demonstrate the potential to use the composites in bipolar plate applications. This research contributes a direction for further improvement of marketable thermoplastic bipolar plate composite materials.