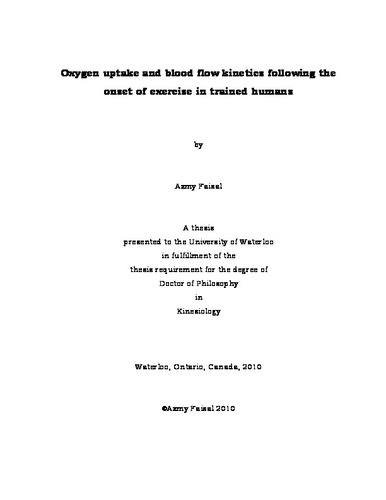 The main hypothesis of this thesis was that the regulation of oxygen uptake (VO2) kinetics at the onset of exercise in trained young men is linked to cardiovascular adaptations. Two studies were conducted to investigate the interrelationships between oxygen (O2) transport and O2 utilization in accelerating VO2 kinetics at the onset of exercise. In the first study, simultaneous kinetics of VO2 and cardiac output (Q) were studied during the transition to heavy and moderate cycling exercise (Chapter 2). The acceleration of VO2 kinetics during the heavy exercise that followed prior moderate or heavy exercise was enabled by the rapid increase in Q; whereas, the acceleration of VO2 kinetics during moderate exercise that followed a heavy warm-up was associated with small changes in Q kinetics. The objective of the second study was to determine, in a model of forearm exercise, if the elevation of forearm blood flow (FBF) prior to the onset of exercise by prior circulatory occlusion would accelerate FBF and muscle oxygen uptake (VO2mus)kinetics during subsequent exercise as demonstrated previously for prior exercise (Chapter 3). Prolonged ischemia (15 min occlusion) followed by 3 min recovery reduced FBF and impaired VO2mus kinetics during subsequent heavy hand-grip exercise. However, prior heavy exercise confirmed the previous findings and resulted in a faster FBF and VO2mus kinetics. There was a high positive correlation between the time course of change in FBF and VO2mus at the onset heavy exercise. In a follow up of the second study, to investigate a possible mechanism for the slower adaptation of VO2mus following ischemia, the prior occlusion condition was repeated after ingesting a high dose of ibuprofen. Prostaglandin inhibition by ibuprofen augmented the FBF response during reactive hyperaemia and restored FBF during the heavy exercise that followed 15 min of circulatory occlusion to the control level. These two studies provide evidence that O2 delivery plays a dominant role in accelerating VO2 kinetics at the onset of heavy exercise in trained young men. The findings exposed differences in the mechanisms regulating pulmonary VO2 and VO2mus with prior exercise resulting in higher Q and FBF, but no changes in O2 extraction to yield the faster increase in pulmonary VO2 and VO2 at the onset of subsequent heavy exercise. In contrast, prior occlusion slightly retarded the increase in FBF and significantly reduced O2 extraction thus delaying VO2 kinetics. The precise mechanisms impairing VO2mus kinetics at the onset of heavy forearm hand-grip exercise that starts after a brief recovery from prolonged occlusion are still unknown, but this impairment may be partially due to a vasoconstrictor effect restricting blood flow during the adaptation to exercise and redistribution of the blood to the periphery. In a third study, the influence of muscle activity on the VO2 slow component during heavy exercise and O2 cost during moderate exercise that followed a heavy warm-up were examined (Chapter 4). The heavy exercise VO2 slow component was attenuated in a graded fashion by prior moderate and heavy warm-ups, and the principal components analysis showed a moderate but significant correlation between the changes in the integrated electromyographic activity and the VO2 slow component amplitude. The higher O2 cost of moderate exercise following a heavy warm-up was associated with higher mean power frequency. Changes in VO2 slow component and increased O2 cost during moderate exercise after prior heavy warm-up appear to be related to some changes in surface electromyographic activity which may provide some evidence for increased muscle fibres recruitment.