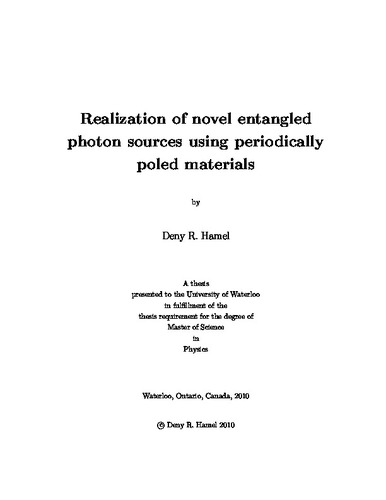 This thesis deals with the production of entangled photons using spontaneous parametric down-conversion (SPDC). We start with a short overview of some important theoretical concepts. First we provide a brief reminder of the theory of entanglement. We then discuss how the state of quantum systems can be determined using quantum state tomography. We also explain SPDC, the physical process which we use to produce entangled photons. Finally, we give an overview of the methods which have been used to produce entangled photons in the past, both for two- and three-photon entanglement. The first experiment is the design of an efficient source of entangled photon pairs based on a polarizing Sagnac interferometer configuration. With this configuration, we can use quasi-phasematched materials which allow for higher efficiencies than standard bulk nonlinear materials. The source is pumped by a low-power continuous-wave laser diode, and produces degenerate photon pairs at 809nm. It has a spectral brightness of 87,500 pairs/(s mW nm), and the fidelity of the produced quantum states with a Bell state is 98.9%. The source is used for experiments in quantum key distribution, cluster state quantum computing, remote state preparation, state discrimination, and entanglement-enhanced classical communication. The second experiment discussed in this thesis is the generation of photon triplets using cascaded SPDC. In this experiment, a primary SPDC source is pumped with a low-power, continuous-wave laser diode, producing photon pairs. Single photons from these pairs serve as the pump for a second down-conversion, resulting in photon triplets. This is the first demonstration of the direct production of photon triplets, and the first observation of SPDC at the single photon level. This method could potentially be used to produce entangled photon triplets without post-selection, and as a source of triggered Bell pairs.