A narrative policy analysis of the Accessibility for Ontarians with Disabilities Act, 2005: Exploring implementation in municipal recreation 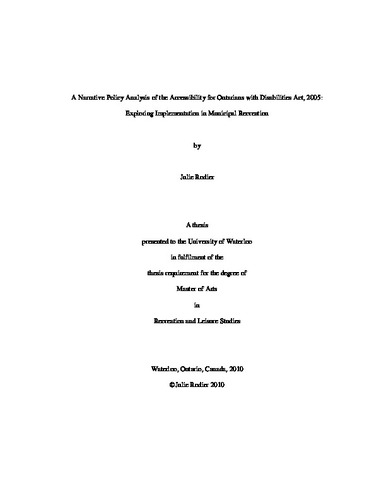 The presence of disability in the political sphere has increased with the enactment of the Accessibility for Ontarians with Disabilities Act (AODA) in 2005. In 2008, implementation of the first standard focused on Customer Service began in accordance with the AODA. While this legislation was in its early phase, it was crucial to conduct research to understand the ways the legislation was being expressed in practical terms. Research makes it possible to point to areas of unmet promises between theoretical and practice application of the AODA so that it may attain its full potential. The purpose of this study was to conduct a narrative policy analysis during the implementation phase of the AODA to identify the parallel and divergent stories that arise from policy actors. Using an interpretive stance, this study was conducted with key people who played a role in implementing the AODA in the municipal recreation context. Participants included both persons responsible for implementing the AODA (i.e., city employees) and people with disabilities who have been directly affected by this policy. This narrative policy analysis sought to uncover the stories (stories that are repeatedly told), counter-stories (those that run counter to dominant stories), and non-stories (stories that are not present) (Roe, 1994). Three groups of narratives arose from this study. Narratives about creating and implementing the AODA included stories about clear steps to implementation, enforcement guidelines, and proactive steps to achieve accessibility. Counter-stories described a need for more specific details, explicit enforcement guidelines, and a “deal with things as they come up” course of action. Narratives about disability examined meanings of disability present in the AODA for people with and without disabilities. Additional narratives explored discrimination against people with disabilities, links between accessibility standards and the removal of barriers for people with disabilities. Issues of accessibility were further explored in the context of leisure and recreation. Analysis revealed the diversity in leisure experiences of people with disabilities, and the need to expand the definition of accessibility for better inclusion in municipal recreation. These narratives were then contrasted and combined to form a metanarrative (alternative to consensus) to recast issues surrounding the AODA in a new light. The metanarrative highlighted a gap between the theory of the AODA and its practical applications. In theory, a policy was needed to improve the inclusion of people with disabilities in community; however, in practice, the AODA might not have the desired impact due in part to the interplay of policy and disability issues. This study suggests that the AODA is much more than what is written on paper in that it has the power to transform our society. The full intent of the AODA will be difficult to achieve until more people are aware of the legislation, its impacts, and its importance.