The Developmental History of a Cupriferous Swamp in Southeastern New Brunswick, Canada 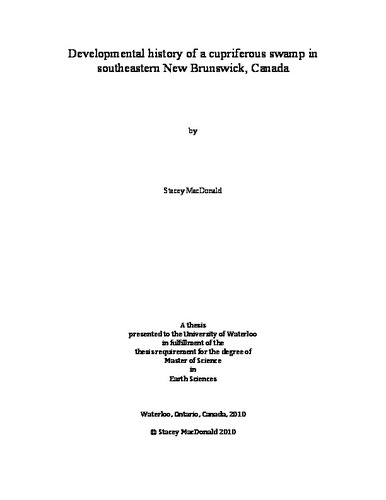 Cupriferous swamps are characterized by high concentrations of copper in the soil and water. The Aboushagan swamp, situated 8km northwest of Sackville, New Brunswick is a unique metalliferous wetland where copper is naturally sequestered in the peat without having a significant negative effect on the vegetation. This paleoecological history of this region is not well known and few studies have attempted to characterize the local vegetation trends. This study investigates the post-glacial vegetation history of the swamp as well as any relationship it may have with the copper present in the peat. Surface peats (dry weight) have previously been found to contain up to 10% copper. This study found Cu content in two peat cores ranged from trace values to a high of 4800 µg/g and 25 000 µg/g (0.48 and 2.5 % dry weight copper). Despite the increased values, there was no detectable change in pollen due to copper concentration and any increase of copper in the peat material is likely a result of post depositional hydrological processes transporting copper into the layers of peat where it is being sequestered in the organic material and never becoming bioavailable to the surface vegetation. Pollen revealed that following deglaciation, the Aboushagan swamp began to develop as a rich fen around 10.7 ka BP that transitioned into a poor fen with Sphagnum around 9.9 ka BP as the wetland basin filled in. Around 8290 ka BP, temperatures warmed and the soil dried up leading to more canopy cover and fern abundance which yielded a mixed coniferous-deciduous swamp with Sphagnum in the understory that persisted until approximately 1.4 ka BP. Maritime vegetation trends in other studies describe a pine maxima (7.5 ka BP) and hemlock maxima (6.5-4.5 ka BP), neither of which were not found in the pollen record here due to a lack of peat accumulation between 8290 and 4350 ka BP. This is likely due to a regional climatic change that increased temperatures and decreased summer precipitation between 8 and 4 ka BP. In the last 1.5ka BP, the swamp has been dominated by spruce but other trees such as pine, fir, and birch have grown in abundance in the last few hundred years. A decrease in overall pollen abundance and concentration near the top of the core may be evidence for the little ice age event (1450 cal years BP). Today the swamp is a typical mixed coniferous-deciduous swamp with Picea mariana, Larix laricina, Acer rubrum, and Abies balsamea. An understanding of the swamp’s ability to sequester copper from becoming bioavailable has implications for the rehabilitation of contaminated industrial landscapes with wetland technologies. This study also highlights the high sensitivity with which wetlands can be used to detect and differentiate between autogenic (local) and allogenic (regional) climatic and vegetation changes while describing the vegetation community succession in the Aboushagan basin since the last deglaciation.