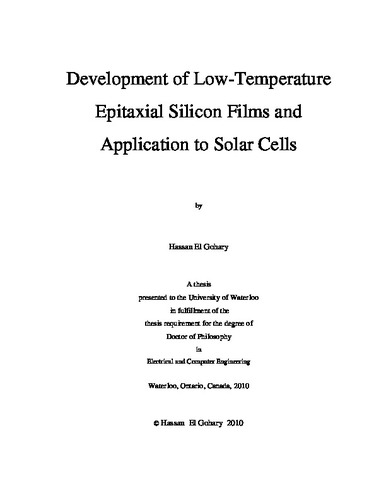 Solar photovoltaic has become one of the potential solutions for current energy needs and for combating greenhouse gas emissions. The photovoltaics (PV) industry is booming, with a yearly growth rate well in excess of 30% over the last decade. This explosive growth has been driven by market development programs to accelerate the deployment of sustainable energy options and rapidly increasing fossil fuel prices. Currently, the PV market is based on silicon wafer solar cells (thick cells of around 150–300 μm made of crystalline silicon). This technology, classified as the first-generation of photovoltaic cells. The second generation of photovoltaic materials is based on the introduction of thin film layers of semiconductor materials. Unfortunately, the conversion efficiency of the current PV systems is low despite the lower manufacturing costs. Nevertheless, to achieve highly efficient silicon solar cell devices, the development of new high quality materials in terms of structure and electrical properties is a must to overcome the issues related to amorphous silicon (a -Si:H) degradation. Meanwhile, to remain competitive with the conventional energy sources, cost must be taken into consideration. Moreover, novel approaches combined with conventional mature silicon solar cell technology can boost the conventional efficiency and break its maximum limits. In our approach, we set to achieve efficient, stable and affordable silicon solar cell devices by focusing on the development of a new device made of epitaxial films. This new device is developed using new epitaxial growth phosphorous and/or boron doped layers at low processing temperature using plasma enhanced chemical vapor deposition (PECVD). The junction between the phosphorous or boron-doped epitaxial film of the device is formed between the film and the p or n-type crystalline silicon (c-Si) substrate, giving rise to (n epi-Si/p c-Si device or p epi-Si/n c-Si device), respectively. Different processing conditions have been fully characterized and deployed for the fabrication of different silicon solar cells architectures. The high quality epitaxial film (up to 400 nm) was used as an emitter for an efficient stable homojunction solar cell. Extensive analysis of the developed fine structure material, using high resolution transmission electron microscope (HRTEM), showed that hydrogen played a crucial role in the epitaxial growth of highly phosphorous doped silicon films. The main processing parameters that influenced the quality of the structure were; radio frequency (RF) power density, the processing chamber pressure, the substrate temperature, the gas flow rate used for deposition of silicon films, and hydrogen dilution. The best result, in terms of structure and electrical properties, was achieved at intermediate hydrogen dilution (HD) regime between 91 and 92% under optimized deposition conditions of the rest of the processing parameters. The conductivity and the carrier mobility values are good indicators of the electrical quality of the silicon (Si) film and can be used to investigate the structural quality indirectly. The electrical conductivity analyses using spreading resistance profile (SRP), through the detection of active carriers inside the developed films, are presented in details for the developed epitaxial film under the optimized processing conditions. Measurements of the active phosphorous dopant revealed that, the film has a very high active carrier concentration of an average of 5.0 x1019 cm-3 with a maximum value of 6.9 x 1019 cm-3 at the interface between substrate and the epitaxial film. The observed higher concentration of electrically active P atoms compared to the total phosphorus concentration indicates that more than half of dopants become incorporated into substitutional positions. Highly doping efficiency ηd of more than 50 % was calculated from both secondary ion mass spectroscopy (SIMS) and SRP analysis. A variety of proposed structures were fabricated and characterized on planar, textured, and under different deposition temperatures. Detailed studies of the photovoltaic properties of the fabricated devices were carried out using epitaxial silicon films. The results of these studies confirmed that the measured open circuit voltage (Voc) of the device ranged between 575 and 580 mV with good fill factor (FF) values in the range of 74-76 %. We applied the rapid thermal process (RTP) for a very short time (60 s) at moderate temperature of 750oC to enhance the photovoltaic properties of the fabricated device. The following results were achieved, the values of Voc, and the short circuit current (Isc) were 598 mV and 27.5 mA respectively, with a fill factor value of up to 76 % leading to an efficiency of 12.5 %. Efficiency enhancement by 13.06 % was achieved over the reference cell which was prepared without using RTP. Another way to increase the efficiency of the fabricated device is to reduce the reflections from its polished substrate. This was achieved by utilizing the light trapping technique that transforms the reflective polished surface into a pyramidical texturing using alkaline solutions. Further enhancements of both Voc and Isc were achieved with values of 612 mV and 31mA respectively, and a fill factor of 76 % leading to an increase in the efficiency by up to 13.8 %. A noticeable efficiency enhancement by ~20 % over the reference cell is reported for the developed devices on the textured surfaces. Moreover, the efficiency of the fabricated epitaxial silicon solar cells can be boosted by the deployment of silicon nanocrystals (Si NCs) on the top surface of the fabricated devices. In the course of this PhD research we found a way to achieve this by depositing a thin layer of Si NCs, embedded in amorphous silicon matrix, on top of the epitaxial film. Structural analysis of the deposited Si NCs was performed. It is shown from the HRTEM analysis that the developed Si NCs, are randomly distributed, have a spherical shape with a radius of approximately 2.5 nm, and are 10-20 nm apart in the amorphous silicon matrix. Based on the size of the developed Si NCs, the optical band gap was found to be in the region of 1.8-2.2 eV. Due to the incorporation of Si NCs layer a noticeable enhancement in the Isc was reported.