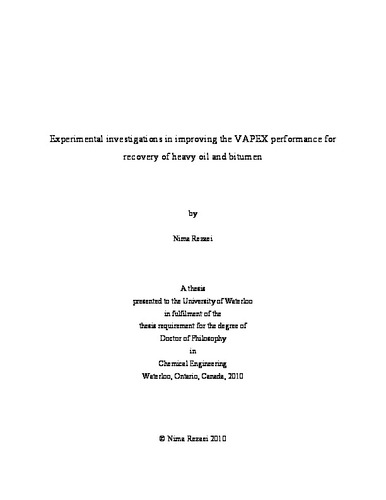 The process of vapor extraction (VAPEX) is a recovery process which targets the heavy oil and bitumen resources. Owing to high viscosity values for these unconventional types of oil, the recovery processes in such reserves are still challenging. The unconventional oil recovery processes usually include a mechanism for reducing the oil viscosity by means of heat, solvent, or both. The process of VAPEX utilizes the injection of a light hydrocarbon solvent into a reservoir for recovering the viscous oil in place by diffusing into the oil and by providing sufficient mobility to the oil upon dilution. Although this process offers a variety of advantages over the alternative thermal recovery processes such as SAGD or CSS, it suffers from two major drawbacks. First, the oil production rates obtained in the VAPEX process are considerably lower than those obtained in the thermal processes. Second, the solvent cost is considerably high. We tried to tackle these two problems during this research and we searched for potentials for an improved VAPEX process. Three potentially improved occurrences of a VAPEX project were found when: 1) the injected solvent was superheated, 2) the wettability of media was altered to oil-wet, and 3) the vugs were distributed in the porous media. Warm VAPEX process is introduced in which the VAPEX process is thermally augmented through superheating the solvent vapor. An attractive feature of this process is the capability of the solvent in being able to condense at the bitumen-solvent interface, which provides the opportunity for the bitumen to be upgraded in-situ through asphaltene precipitation. The asphaltene precipitation was not observed during the conventional vapor extraction process and was only observed during the warm VAPEX process. Upon a moderate level of superheating, the production rate of bitumen was sufficiently improved while the solvent content of the produced oil was significantly decreased as a result of decreased solubility of solvent in the oil at elevated temperatures. Therefore, more oil was produced at lower costs. The warm VAPEX experiments were conducted at 4 temperature levels in high and low permeability media using Cold Lake bitumen and Lloydminster heavy oil blend, n-pentane was used as solvent. The warm VAPEX process was found to be more effective for Cold Lake bitumen and for less permeable media. The potential of in-situ upgrading decreased when the level of superheating increased. The second potential for an improved VAPEX process obtained when the wettability of porous medium was altered to oil-wet conditions. Although this wettability condition is harmful to steam-based recovery processes, such as SAGD, it becomes beneficial to VAPEX. For the application of VAPEX process in fractionally wet media the wettability of glass beads was altered to oil-wet conditions through silylation process, and the VAPEX experiments were conducted in a random packing of water-wet and oil-wet beads of similar size at 7 different compositions. A substantial increase in the oil production rate was observed in a completely oil-wet medium, compared to the water-wet medium. By increasing the fraction of oil-wet beads in the packing up to a critical composition, the production rate of live oil increased linearly with the increase in the fraction of oil-wet beads in the packing during the vapor extraction process. Beyond this critical composition, however, the production rate of live oil did not change significantly with further increase in the fraction of the oil-wet beads in the randomly packed medium. Vugs were also found to be beneficial to the production performance of the VAPEX process. The presence of vugs was investigated in synthesized vugular media at 4 different levels of vuggy-to-total pore volume ratios. The performance of vugular media was compared to that of the homogeneous sintered media. The vugs facilitated the production of oil during the VAPEX process by providing flow communication between the vugs and the surrounding matrix, and therefore, by providing a local high permeability pathways towards the production well. A peak in the oil production rate was observed whenever a series of vugs were simultaneously invaded by the solvent vapor. The overall production rate of oil was higher in vuggy media compared to a homogeneous media at the same overall porosity and permeability. Furthermore, the magnitude of residual oil saturation left behind was also slightly lower in vuggy medium because the vugs were perfectly drained. Finally, a constant rate air injection (CRAI) porosimetry method was developed for characterization of vugs in a vugular media. This method was successfully tested in different synthetic vugular media, and the results illustrated higher accuracy in CRAI porosimetry method compared to constant rate mercury porosimetry. CRAI porosimetry method was also employed for identification of higher permeability regions embedded in a matrix of lower permeability. The analysis of a typical porosimetry signal was also modified.