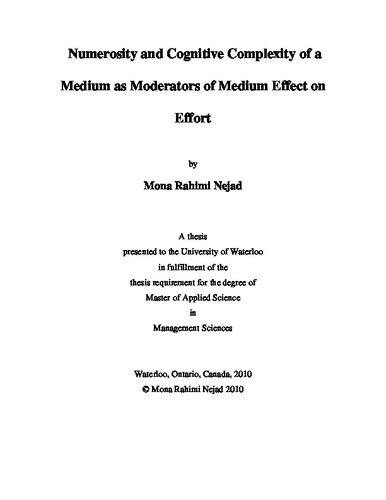 As a part of loyalty programs in marketing or as incentive plans in companies, mediums have attracted considerable interest from marketing and organizational behavior researchers. Previous studies focused mainly on the effects of mediums on people’s choices and not on the role of moderators of a medium effect. The goal of the present thesis is to study two such moderators namely the numerosity of a medium and the cognitive complexity of mediums. In this study, after a thorough theoretical analysis, experimental data is analyzed to explore the relation between numerosity and cognitive complexity of a medium on individuals’ efforts. Our findings suggest that the medium effect is stronger when a medium is more numerous. Also, a more cognitively complex medium makes the mediums more effective.

Mona Rahimi Nejad (2010). Numerosity and Cognitive Complexity of a Medium as Moderators of Medium Effect on Effort. UWSpace. http://hdl.handle.net/10012/5547