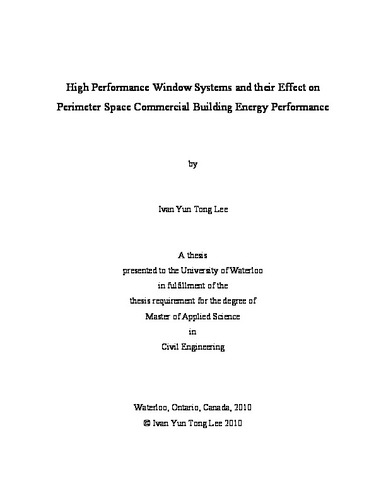 In the quest for improving building energy efficiency raising the level of performance of the building enclosure has become critical. As the thermal performance of the building enclosure improves so does the overall energy efficiency of the building. One key component in determining the energy performance of the building enclosure is windows. Windows have an integral role in determining the energy performance of a building by allowing light and heat from the sun to enter into a space. Energy efficient buildings take advantage of this free solar energy to help offset heating energy consumption and electric lighting loads. However, windows are traditionally the least insulating component of the modern building assembly. With excessive use, larger window areas can lead to greater occupant discomfort and energy consumption from greater night-time heat loss, higher peak and total cooling energy demand from unwanted solar gains, and discomfort glare. As a result, windows must be carefully designed to not only minimize heat loss, but also effectively control solar gains to maintain both a thermally and visually comfortable environment for the appropriate climate region and orientation. In this thesis, a complete analysis of window assemblies for commercial office buildings is presented. The analysis is divided into three sections: the Insulated Glazing Unit (IGU), the Curtain Wall Section (frames), and the overall energy performance of a typical office building. The first section investigates the performance characteristics of typical and high performance IGUs, specifically its insulating value (Ucg), its solar heat gain properties (Solar Heat Gain Coefficient, SHGC), and its visual transmittance (VT) through one-dimensional heat transfer and solar-optical modeling. Mechanisms of heat transfer across IGUs were investigated giving insight into the parameters that had the most significant effect on improving each performance characteristic. With a through understanding of IGU performance, attainable performance limits for each of property were generated from combining of different glazing materials, fill gases, and coatings. Through the right combination of materials IGU performance can be significantly altered. The U-value performance of IGUs ranges from 2.68 W/m2K (R-2.1) for a double-glazed, clear, air filled IGU to 0.27 W/m2K (R-21) for a quint-glazed, low-E, xenon filled high performance IGU. The second part of the thesis looks at the thermal performance of curtain wall sections that hold the IGU through two-dimensional heat transfer modeling. Similar to the IGUs, heat transfer mechanisms were studied to by substituting different materials to determine which components are crucial to thermal performance. From this analysis improvements were made to typical curtain wall design that significantly reduces the overall heat transfer within the frame section, producing a high performance curtain wall section. With simple modifications, a high performance curtain wall section can reduce its U-value by as much as 81% over a typical curtain wall section, going from 13.39 W/m2K to 2.57 W/m2K. Thus significantly reducing the U-value of curtain wall systems, particularly for smaller windows. The final part of the thesis examines the impact of typical and high performance windows on the energy performance of perimeter offices of a high-rise commercial building located in Southern Ontario. An hourly simulation model was set up to evaluate both the annual and peak energy consumption of a typical perimeter office space. The office faced the four cardinal directions of north, east, south, and west to evaluate the effect of orientation. The model also included continuous dimming lighting controls to make use of the available daylight. The effect of exterior shading on perimeter space energy performance was also investigated with both dynamic and static exterior shading devices. The results of the simulations revealed that window properties have very little influence on the energy performance of a high internal heat gain office, that is typical of older offices with less energy efficient office equipment and lighting and a higher occupant density. Conversely, window properties, particularly the insulating value of the window, has a greater effect on the energy performance of a mid to low internal heat gain office that is typical of most modern day commercial buildings. The results show windows with lower U-values yet higher SHGC are preferred over windows of similar U-values but with lower SHGC. The results also indicate that both static and dynamic shading have very little effect on energy performance of mid to low internal heat gain offices. From this analysis optimal window areas in the form of window-to-wall ratios (WWR) are presented for each orientation for mid to low internal heat gain offices. The optimal WWR for south-facing facades are between 0.50 to 0.66, and 0.30 to 0.50 for east-, west-, and north-facing facades, while for high internal heat gain perimeter spaces window areas should be kept to a minimum.