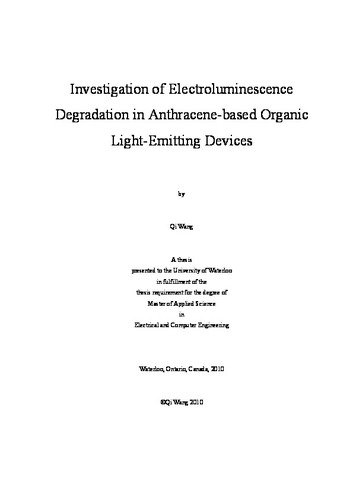 Organic light-emitting devices (OLEDs) have attracted significant attention because of their unique advantages for flat panel display applications. However, the relatively limited electroluminescence (EL) stability of blue emitting OLEDs continues to limit the commercialization of full color OLED displays. In most cases, the decrease in EL efficiency is also accompanied by a loss in blue color purity. Thus, the understanding of the degradation mechanisms of both the EL efficiency loss and color purity loss and the corresponding solutions to device degradation are required. In this thesis, electrical aging mechanism in anthracene-based OLEDs is investigated by using a number of techniques, including delayed EL measurements. The studies reveal that electrical aging is associated with an increasing concentration of an intermolecular species with a weak characteristic luminescence at around 535 nm. This species is capable of trapping charges, and thus plays a role as an electron-hole recombination center with prolonged electrical driving. Weak green luminescence from this species leads to an increased green/blue emission ratio, and causes the color purity loss in aged devices. The results also suggest that this species is also efficient in dissipating excitation energy non-radiatively, hence is capable of quenching singlet excitons in anthracene-based OLEDs, contributing to the observed efficiency loss with electrical aging. Moreover, the photo-stability of the organic/metal cathode interface in OLEDs is studied. Irradiating OLEDs by external illumination is found to result in a gradual increase in driving voltage and decrease in EL efficiency. This photo-induced degradation in device performance is found to be caused by changes at the organic/metal cathode interface that lead to a deterioration in electron injection. Evidence of photodegradation of the same interface, inherently, by device own EL, is also reported. The results uncover an important degradation mechanism in OLEDs and shed the light on a phenomenon that might limit the stability of other organic optoelectronic and photovoltaic devices.