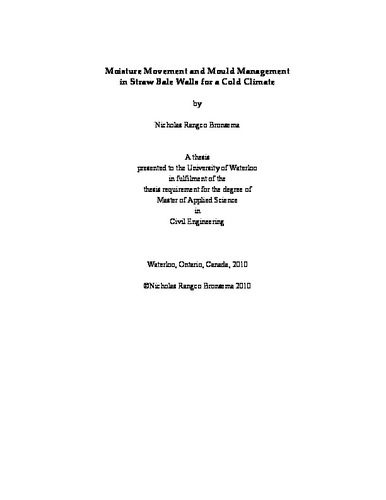 There is a growing interest in straw bale construction for its low embodied energy and insulation value. Early studies of its structural behaviour and fire resistance have shown it to be a viable alternative to traditional building techniques. However, the biggest remaining obstacle to widespread acceptance is the moisture behaviour within the straw bale walls, especially as it concerns mould growth. The uncertainty of this behaviour leads to the hesitation of building officials and insurance providers to freely accept straw bale construction. Therefore, this study investigates the moisture, temperature and mould growth in straw bale walls, through a combination of analysis, dynamic modeling and field studies. A study of mould is presented along with the current methods available for predicting mould growth. Moisture is the primary controllable factor to mould growth in buildings. Therefore, an understanding of moisture accumulation within straw bale walls is necessary to provide a safe design that precludes mould growth. This study compiles the current state of knowledge of the hygrothermal properties of the materials used in straw bale walls. Then a parametric steady-state analysis is conducted to show the expected behaviour of vapour diffusion and the effects of the material properties. Two 14”thick x 6’ wide x 8’ high straw bale test walls were constructed: one was rendered with a typical cement-lime plaster and the other with a clay plaster. Temperature and moisture were monitored throughout the walls for over a year. These test walls provide more information on the macro behaviour of the walls to both vapour diffusion and, more importantly, rain. Hygrothermal computer modeling was conducted and compared to the test data to assess its accuracy. Thermal modeling was successful, while moisture modeling was found to be more difficult due to a lack of accurate rain data. With better climate data it is expected that accurate hygrothermal modeling of straw bale walls is possible. The result of this work is a general starting point for more detailed studies of the hygrothermal behaviour of straw bale walls with the ultimate goal of assessing the mould risk for various construction techniques and locations.