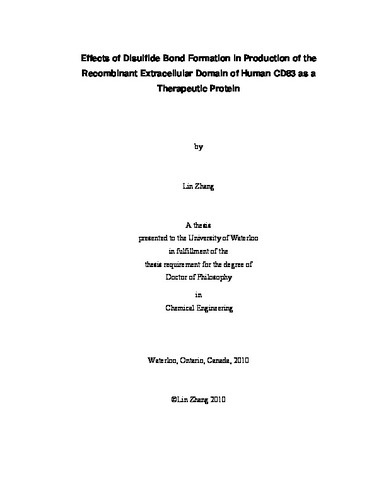 The formation of aberrant disulfide bonds is a structural consideration for the manufacturing of the extracellular domain of human CD83 (hCD83ext), a potential therapeutic protein. In certain instances, hCD83ext protein products, even when stored frozen, tend to dimerize or even multimerize through the formation of aberrant intermolecular disulfide bonds. Herein, we discovered an analytical inconsistency and applied a modified sample preparation protocol for proper structural analysis of hCD83ext products which are heterologously expressed in Escherichia coli and subsequently purified. In addition, a mutant derivative with the Cys100Ser mutation was identified as an improved version which did not form dimers or multimers. The identification of this mutant variant as a more potent therapeutic protein than other hCD83ext species demonstrated that the structural variation associated with disulfide bond formation can be a critical issue for rigorous control of the quality and bioactivity of therapeutic proteins. The application of this mutant variant for protein therapeutic is currently under exploration. As a comparative study, the hCD83ext was expressed as a glutathione-S-transferase (GST) fusion in two E. coli B strains, i.e. BL21 and Origami B having a reductive and oxidative cytoplasm. The final therapeutic products of hCD83ext produced by the two expression hosts exhibited significant differences in protein conformation and molecular properties, which presumably resulted from different disulfide patterns. The study highlights the importance of developing proper host/vector systems and biomanufacturing conditions for the production of recombinant therapeutic proteins with a consistent product quality. Cys27 in the hCD83ext was identified as a target for molecular manipulation. Two E. coli strains of BL21(DE3) and Origami B(DE3) were used as the expression host to produce the Cys27 mutants. It was observed that Cys27 was involved in the in vivo formation of intramolecular disulfide bonds when hCD83ext was expressed in Origami B(DE3). The Origami-derived protein products had a higher tendency than the BL21-derived counterparts for multimerization via the in vitro formation of intermolecular disulfide bonds. Various analyses were conducted to identify the structural differences among these mutant variants. Most importantly, molecular stability was enhanced by the Cys27 mutations since the Cys27 mutants derived from either BL21 or Origami were much less susceptible to degradation compared to wild-type hCD83ext. This study highlights the implications of aberrant disulfide bond formation on the production of therapeutic proteins. To address an inconsistent bioactivity issue that is primarily due to the aberrant formation of disulfide bonds associated with the presence of five cysteine residues, i.e. AA 27, 35, 100, 107, and 129, the molecular role that each cysteine plays upon the formation of intramolecular or intermolecular disulfide bonds was characterized, using various hCD83ext mutant variants derived by two E. coli expression hosts, i.e. BL21(DE3) and Origami B(DE3). Among the five cysteines, Cys100 and Cys129 can act as a bridging cysteine for in vitro multimerization via the formation of intermolecular disulfide bonds. The multimerization can be alleviated to some extent with less free Cys129 residues, associated with the possible formation of Cys27-Cys129 intramolecular disulfide bond. As a result, introducing the Cys27 mutation can increase the multimerization presumably via freeing more Cys129 residues. In addition, protein stability can be improved in the presence of the Cys27 mutation. The formation of the Cys27-Cys129 intramolecular disulfide bond appears to be more effective in the presence of the Cys100 mutation, resulting in the suppression of multimerization. The two conserved cysteine residues, i.e. Cys35 and Cys107, can be potentially linked to form an intramolecular disulfide bond, particularly when the protein is produced in Origami B(DE3).

Lin Zhang (2010). Effects of disulfide bond formation in production of the recombinant extracellular domain of human CD83 as a therapeutic protein. UWSpace. http://hdl.handle.net/10012/5533