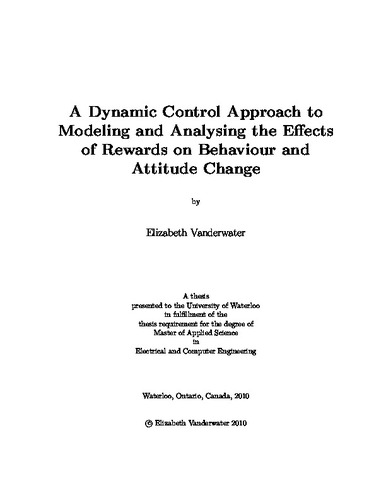 Motivated by the dynamic feedback nature of human attitudes and behaviours, this work adopts a control systems engineering approach to studying a psychological system. In particular, two discrete-time nonlinear attitude-behaviour models are developed to describe how rewards influence a person's attitude and behaviour. The first model arises from three well-established social psychological theories: the theory of planned behaviour, cognitive dissonance theory and the overjustification effect. This model, called the one-person system, consists of a single person who is influenced (in a controlling manner) by a reward. The second model, called the two-person system, consists of two people, one of whom is influenced by a reward, and is obtained by extending the framework of the one-person system to incorporate the additional influence exerted by the behaviours of other people. Many interesting control problems arise for these two systems; this work focuses on the problem of finding a sequence of reward values that is capable of forcing the behaviour of a person (who has an initially negative attitude) to a certain, positive value. Open-loop and closed-loop controllers are designed to meet this control objective and simulations are used to confirm the functionality of these controllers. Additionally, throughout the system analysis, psychological predictions made by the models that may be of interest to social psychologists are highlighted.

Elizabeth Ruth-Anne Vanderwater (2010). A Dynamic Control Approach to Modeling and Analysing the Effects of Rewards on Behaviour and Attitude Change. UWSpace. http://hdl.handle.net/10012/5530