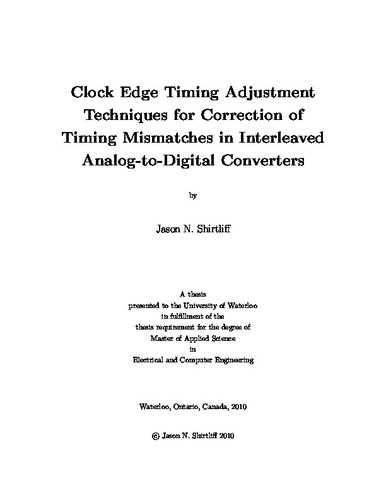 Time-interleaved analog-to-digital converters make use of parallelization to increase the rate at which an analog signal can be digitized. Using M channels at their maximum sampling frequency allows for an overall sampling frequency of M times the individual converters' sampling rate. However, the performance of interleaved systems suffers from mismatches between the sub-converters. Offset mismatches, gain mismatches, and timing mismatches all contribute to the degradation of the resolution of the ADC system. Offset and gain mismatches can be corrected for in the digital domain with minimal extra processing. However, the effects of timing mismatches (specifically, the magnitude of the spurious tones that are introduced) are dependent on the frequency of the input, so digital correction is not a trivial task. This makes a circuit-based correction mechanism a much more desirable solution to the problem. This work explores the effect of timing mismatches on interleaved analog-to-digital converter performance. A set of requirements is derived to specify the performance of a variable-delay circuit for the tuning of sample clocks. Since the mismatches can be composed of both fixed and random components, several candidate architectures are modeled for their delay and jitter performance. One candidate is selected for design, based on its jitter performance and on practical considerations. A practical implementation of the clock-adjustment circuit is designed, featuring low-noise differential clock paths with high precision delay adjustment. A means of testing the circuit and verifying the precision of adjustment is presented. The design is implemented for fabrication, and post-layout simulations are shown to demonstrate the feasibility and functionality of the design.