"Covetous to parley with so sweet a frontis-peece": Illustration in Early Modern English Play-Texts 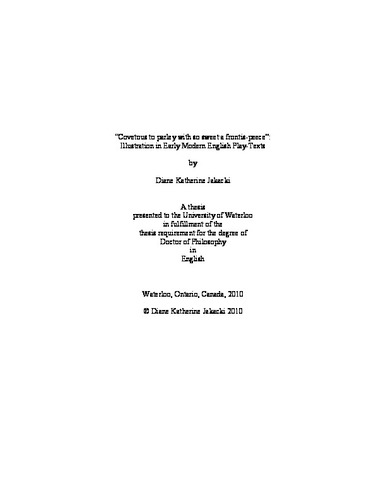 This dissertation studies visual artifacts associated with early modern theatre and book culture, and through them examines acts of communication in the marketplace. These artifacts, illustrated play-text title pages from the period 1600 to 1660, provide scholars with an opportunity to better understand the discursive power of theatre and subjects associated with drama in seventeenth-century London. This work offers a set of case studies that demonstrate how title page imagery and its circulation can contribute to our understanding of contemporary theatre culture, and addresses questions of intention, production and distribution. As well, it offers insights into early modern modes of constructing visualization. These artifacts served not only as visual reminders or interpretations of the dramatic works they represented, but were also used as powerful marketing tools that enhanced the cultural capital of the plays throughout London. The title pages were used as posters, tacked to the walls of the booksellers’ shops; the woodcuts were also repurposed, and incorporated into other popular publications such as broadside ballads, which retold the plots of the plays in musical form and were sold on city street corners. These connections raise questions about early modern forms of marketing used by publishers, and challenge the widely accepted belief that images held little value in the society and in the culture of print of the period. In addition, the distribution of these illustrations challenges the widespread conviction that early modern English culture was iconophobic, and suggests that seventeenth-century English society embraced rather than spurned visual media. Methodologically, this study is built on the foundations laid by scholars of English theatre and print culture. Within those fields, however, it has been customary to view these title page illustrations as inferior forms of representation, especially in comparison to their continental counterparts. By using tools from visual rhetoric to expand on how and what these images communicate, I am able to show the important functions they performed, and the distinct and playful way they represent complex relationships between stage and page, audience and performance, reading and spectating. These readings, in turn, enrich our historical understanding of the cultures of print and theatre, and build upon our knowledge of the interactions between these rich and important fields. Each chapter explores theoretical and contextual questions that pertain to some aspect of each illustration, as well as examining whether individual illustrations can inform us further about early modern theatrical performance practices. The introduction surveys the relevant field and introduces the theoretical resources that will be used in the subsequent chapters. Chapter Two examines the 1633 edition of Arden of Faversham and the question of whether the action in the illustration pertains to the play or to a broadside ballad that appeared in the same year. The third chapter provides a theoretical analysis of the performance of violence in the woodcut for The Spanish Tragedy, and how emphatic elements in the image may demonstrate the influence of theatrical performance upon the artist. Chapter Four explores the relationship between the title page of Friar Bacon and Friar Bungay and the concept of celebrity in relation to the Tarltonesque clown character who dominates the action of the image. Chapter Five considers the problematic relationship between theatre, politics and satire in the competing engraved title pages for A Game at Chess. The conclusion draws together the findings, and points to other aspects of early modern print and theatre cultures to which they pertain.