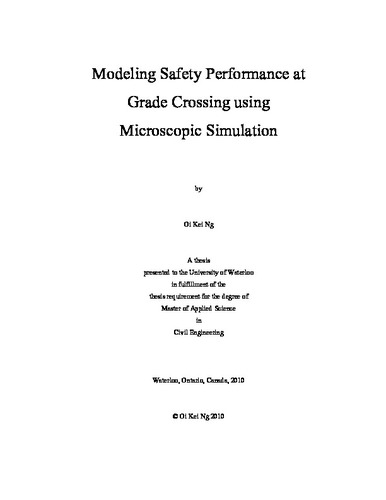 The analysis of grade crossing safety has long focused on vehicle-train crashes using statistical models based on crash data. The potential crashes generated by vehicle-vehicle rear-end conflicts have often been ignored. The interaction of different traffic attributes on safety performance of a grade crossing is also not well-understood. The primary objective of this thesis is to model the causal relationship of vehicle-vehicle interactions by developing the operation logic of gate-equipped grade crossing using a commercially available microscopic simulation package that models human driver behaviors. The simulation-generated vehicle trajectory data allows detail safety performance analysis on vehicle-vehicle interaction over time as they approach the track. A dual-gate equipped crossing at Kitchener, Ontario is selected as the study area. Initially, logic modifications are made to the simulation package (VISSIM) in order to accurately model the grade crossing segment. A two-step calibration is used in this thesis. Firstly, model input parameters for a signalized intersection from literature are used to model typical car-following behavior along this type of roadway. Secondly, parameters used to model drivers’ decision and reaction when approaching crossing is fine tuned through data collection and calibration. After incorporating all the modifications to the simulation package, validation is undertaken by comparing model-generated speed profiles to on-site observed speed profile. The established model is tested for its safety performance sensitivity through varying three traffic attributes in the simulation: (i) percentage of bus, (ii) total traffic volume, (iii) percentage of cars in the center lane of a 2-lane approach. Four safety performance measures were selected. The overall results indicate that the established model is functional and reliable in modeling grade crossing vehicles interactions at gated crossings. In the absence of a train, vehicles’ reduction in speed in the vicinity of a crossing results in traffic flow turbulence that increases the opportunity for high risk rear-end vehicle interactions. The sensitivity test revealed that the spillback behavior of vehicles due to the stopping behaviors of buses increases risk in the upstream section. Also, overloading of vehicles into the network indeed improves safety as the effect of differential speed diminishes. Among the four selected safety performance measures, DRAC seems to reflect problems with rear-end vehicle interactions in the vicinity of a crossing as a function of the traffic attributes considered in this research.