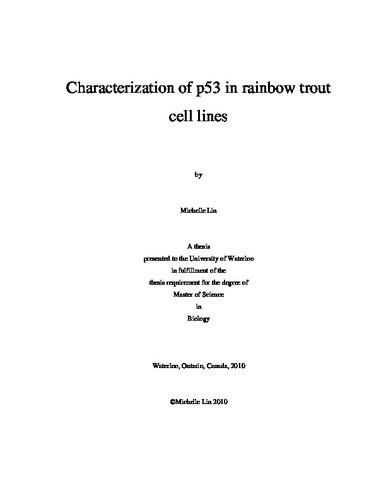 The tumour suppressor protein p53 is a critical protein in the DNA damage checkpoint pathway. It acts as a transcription factor that is involved in initiating the apoptotic pathway; disruption of this pathway can lead to various forms of cancer. Due to its importance in cancer prevention, p53 has been extensively studied, though only a small fraction of these studies have been in non-mammalian models. Some previous studies of p53 expression and regulation in lower vertebrate species have shown potential differences in its control, in comparison to the better characterized mammalian pathways. These differences emphasize the need to further investigate its mechanism of action in lower vertebrate models. To evaluate its biomarker potential for aquatic toxicology studies, two rainbow trout cell lines (RTbrain-W1 and RTgill-W1) were used in dose response experiments using DNA damage checkpoint inducing agents: bleomycin, hydroxyurea, and methyl methanesulfonate. For our studies, a rainbow trout specific polyclonal antibody was developed using purified recombinant rainbow trout p53. The purified antibody was shown to be successful in detecting p53 in rainbow trout cell lines and tissues. Our results show that rainbow trout p53 is not induced by checkpoints initiated by different types of DNA damage. These results infer the possibility of an alternate mechanism of DNA damage checkpoint reaction in these cell lines, which is independent of p53 induction.