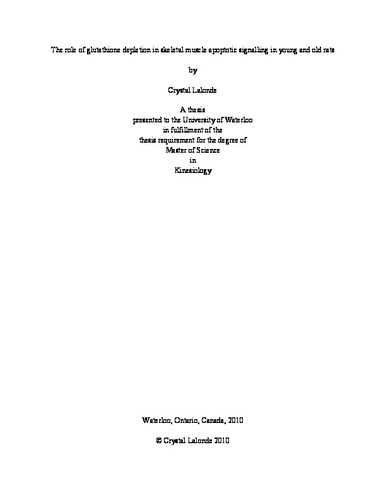 There is substantial evidence that oxidative stress causes negative outcomes in many cell and tissue types. This is especially true of skeletal muscle, as it is continually subjected to various sources of reactive oxygen species (ROS). Oxidative stress in muscle has been linked to several disease states as well as to the normal aging process. Oxidative stress has also been associated with increased apoptotic signalling. Furthermore, elevated apoptosis is consistently observed in aged skeletal muscle and is thought to be one of the mechanisms of age-related muscle atrophy. Due to its post-mitotic nature, skeletal muscle may be more susceptible to the harmful effects of oxidative stress in light of its limited regenerative capacity. As a protective measure, a sophisticated antioxidant system exists in muscle consisting of both enzymatic (superoxide dismutases (SOD’s), catalase, glutathione peroxidase) and non-enzymatic elements (glutathione: GSH). GSH is a ubiquitously expressed tripeptide essential to maintenance of the redox status of the cell. Its role in skeletal muscle apoptosis, especially in different muscle types, is currently unclear. To elucidate the potential role of GSH in skeletal muscle apoptosis and oxidative stress, L-buthionine-[S,R]-sulfoximine (BSO) was used to deplete GSH in young (34.85 ± 0.68 wks) and old (69.11 ± 3.61 wks) male Sprague-Dawley rats. Thiol levels (GSH, GSSG), ROS production, 4-hydroxy-2-nonenal (4HNE) levels, DNA fragmentation and apoptosis-related protein expression were examined in soleus (SOL) and white gastrocnemius (WG) muscle. BSO led to significant GSH depletion (89% in SOL, 96% in WG) compared to age-matched controls. Catalase upregulation, in the absence of change in SOD levels, was evident as a result of BSO treatment and advancing age in both muscle tissues. BSO treatment also resulted in increased DNA fragmentation in WG and SOL, with elevated ROS production in SOL only; both of these effects were independent of age. Advancing age resulted in elevated caspase activity and Hsp70 protein content, with a concomitant decrease in anti-apoptotic ARC in SOL but not WG. Additionally, ROS production, 4HNE content, DNA fragmentation and ARC levels were all significantly elevated in SOL compared to WG. These data indicate that SOL may be subjected to a state of elevated cellular stress. There is also some evidence that GSH depletion increases DNA fragmentation while age contributes to a degradative loss of glycolytic muscle.