The Effect of Mitochondrial Biogenesis on Apoptotic Susceptibility in L6 Myoblasts 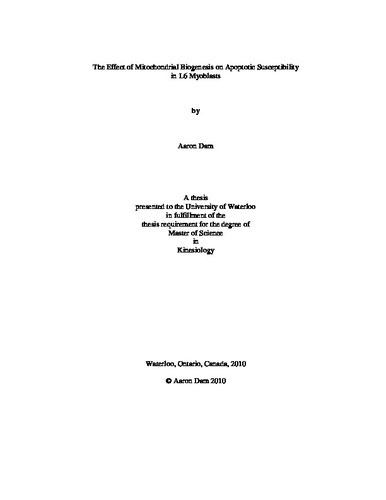 Mitochondria play an essential role in cell metabolism as well as apoptotic signaling. Chronic endurance exercise has been shown to increase mitochondrial content in skeletal muscle. Interestingly, endurance exercise has also been associated with decreased skeletal muscle apoptosis; however, the direct effect of increased skeletal muscle mitochondrial content on apoptotic signaling has not been examined. The purpose of this study was to induce mitochondrial biogenesis in L6 myoblasts and examine the susceptibility of these cells to stress- induced apoptosis. Mitochondrial biogenesis was accomplished using 5-Aminoimidazole-4-carboxamide-ribonucleoside (AICAR) and S-nitroso-N-acetylpenicillamine (SNAP), which activate AMPK and donate nitric oxide, respectively. Successful induction of mitochondrial biogenesis was determined by western blot analysis for mitochondrial specific markers. Following SNAP and AICAR treatment, the average increase in the mitochondrial markers was 24% and 38%, respectively. Subsequent exposure of cells to several apoptosis-inducing agents increased apoptosis. Interestingly, SNAP- and AICAR- treated cells had a lower percentage of apoptotic cells as determined by AnnexinV-FITC/PI fluorescent staining, cell cycle analysis, and cell counting/size analysis. In addition, it was shown that SNAP- and AICAR-treated cells had reduced caspase-3 activity following exposure to apoptotic stimuli. Furthermore, treatment with SNAP and AICAR resulted in increased protein content of the antioxidants MnSOD and catalase. Interestingly, mitochondrial ROS production was not significantly altered between groups with total cellular ROS production being increased in the SNAP- and AICAR-treated groups. In summary, this work demonstrates that increasing mitochondrial content in L6 myoblasts provides protection against stress-induced apoptosis. The mechanism for this protective effect remains to be determined; however, it may be mediated by a combination of increased antioxidant capacity and improved mitochondrial calcium buffering capacity.