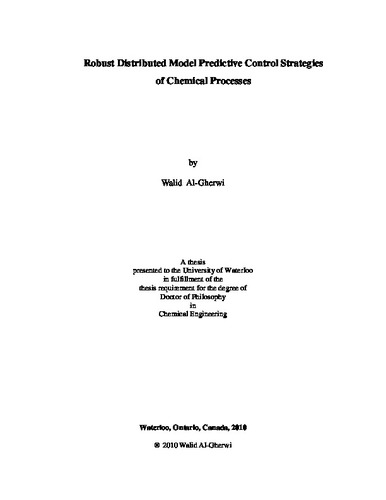 This work focuses on the robustness issues related to distributed model predictive control (DMPC) strategies in the presence of model uncertainty. The robustness of DMPC with respect to model uncertainty has been identified by researchers as a key factor in the successful application of DMPC. A first task towards the formulation of robust DMPC strategy was to propose a new systematic methodology for the selection of a control structure in the context of DMPC. The methodology is based on the trade-off between performance and simplicity of structure (e.g., a centralized versus decentralized structure) and is formulated as a multi-objective mixed-integer nonlinear program (MINLP). The multi-objective function is composed of the contribution of two indices: 1) closed-loop performance index computed as an upper bound on the variability of the closed-loop system due to the effect on the output error of either set-point or disturbance input, and 2) a connectivity index used as a measure of the simplicity of the control structure. The parametric uncertainty in the models of the process is also considered in the methodology and it is described by a polytopic representation whereby the actual process’s states are assumed to evolve within a polytope whose vertices are defined by linear models that can be obtained from either linearizing a nonlinear model or from their identification in the neighborhood of different operating conditions. The system’s closed-loop performance and stability are formulated as Linear Matrix Inequalities (LMI) problems so that efficient interior-point methods can be exploited. To solve the MINLP a multi-start approach is adopted in which many starting points are generated in an attempt to obtain global optima. The efficiency of the proposed methodology is shown through its application to benchmark simulation examples. The simulation results are consistent with the conclusions obtained from the analysis. The proposed methodology can be applied at the design stage to select the best control configuration in the presence of model errors. A second goal accomplished in this research was the development of a novel online algorithm for robust DMPC that explicitly accounts for parametric uncertainty in the model. This algorithm requires the decomposition of the entire system’s model into N subsystems and the solution of N convex corresponding optimization problems in parallel. The objective of this parallel optimizations is to minimize an upper bound on a robust performance objective by using a time-varying state-feedback controller for each subsystem. Model uncertainty is explicitly considered through the use of polytopic description of the model. The algorithm employs an LMI approach, in which the solutions are convex and obtained in polynomial time. An observer is designed and embedded within each controller to perform state estimations and the stability of the observer integrated with the controller is tested online via LMI conditions. An iterative design method is also proposed for computing the observer gain. This algorithm has many practical advantages, the first of which is the fact that it can be implemented in real-time control applications and thus has the benefit of enabling the use of a decentralized structure while maintaining overall stability and improving the performance of the system. It has been shown that the proposed algorithm can achieve the theoretical performance of centralized control. Furthermore, the proposed algorithm can be formulated using a variety of objectives, such as Nash equilibrium, involving interacting processing units with local objective functions or fully decentralized control in the case of communication failure. Such cases are commonly encountered in the process industry. Simulations examples are considered to illustrate the application of the proposed method. Finally, a third goal was the formulation of a new algorithm to improve the online computational efficiency of DMPC algorithms. The closed-loop dual-mode paradigm was employed in order to perform most of the heavy computations offline using convex optimization to enlarge invariant sets thus rendering the iterative online solution more efficient. The solution requires the satisfaction of only relatively simple constraints and the solution of problems each involving a small number of decision variables. The algorithm requires solving N convex LMI problems in parallel when cooperative scheme is implemented. The option of using Nash scheme formulation is also available for this algorithm. A relaxation method was incorporated with the algorithm to satisfy initial feasibility by introducing slack variables that converge to zero quickly after a small number of early iterations. Simulation case studies have illustrated the applicability of this approach and have demonstrated that significant improvement can be achieved with respect to computation times. Extensions of the current work in the future should address issues of communication loss, delays and actuator failure and their impact on the robustness of DMPC algorithms. In addition, integration of the proposed DMPC algorithms with other layers in automation hierarchy can be an interesting topic for future work.