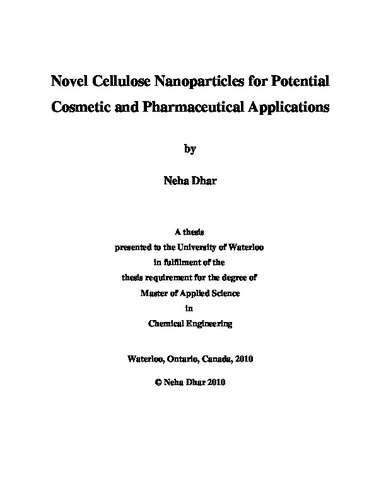 Cellulose is one of the most abundant biopolymers found in nature. Cellulose based derivatives have a number of advantages including recyclability, reproducibility, biocompatibility, biodegradability, cost effectiveness and availability in a wide variety of forms. Due to the benefits of cellulose based systems, this research study was aimed at developing novel cellulosic nanoparticles with potential pharmaceutical and personal care applications. Two different cellulosic systems were evaluated, each with its own benefits and proposed applications. The first project involves the synthesis and characterization of polyampholyte nanoparticles composed of chitosan and carboxymethyl cellulose (CMC), a cellulosic ether. EDC carbodiimide chemistry and inverse microemulsion technique was used to produce crosslinked nanoparticles. Chitosan and carboxymethyl cellulose provide amine and carboxylic acid functionality to the nanoparticles thereby making them pH responsive. Chitosan and carboxymethyl cellulose also make the nanoparticles biodegradable and biocompatible, making them suitable candidates for pharmaceutical applications. The synthesis was then extended to chitosan and modified methyl cellulose microgel system. The prime reason for using methyl cellulose was to introduce thermo-responsive characteristics to the microgel system. Methyl cellulose was modified by carboxymethylation to introduce carboxylic acid functionality, and the chitosan-modified methyl cellulose microgel system was found to be pH as well as temperature responsive. Several techniques were used to characterize the two microgel systems, for e.g. potentiometric and conductometric titrations, dynamic light scattering and zeta potential measurements. FTIR along with potentiometric and conductometric titration was used to confirm the carboxymethylation of methyl cellulose. For both systems, polyampholytic behaviour was observed in a pH range of 4-9. The microgels showed swelling at low and high pH values and deswelling at isoelectric point (IEP). Zeta potential values confirmed the presence of positive charges on the microgel at low pH, negative charges at high pH and neutral charge at the IEP. For chitosan-modified methyl cellulose microgel system, temperature dependent behaviour was observed with dynamic light scattering. The second research project involved the study of binding interaction between nanocrystalline cellulose (NCC) and an oppositely charged surfactant tetradecyl trimethyl ammonium bromide (TTAB). NCC is a crystalline form of cellulose obtained from natural sources like wood, cotton or animal sources. These rodlike nanocrystals prepared by acid hydrolysis of native cellulose possess negatively charged surface. The interaction between negatively charged NCC and cationic TTAB surfactant was examined and it was observed that in the presence of TTAB, aqueous suspensions of NCC became unstable and phase separated. A study of this kind is imperative since NCC suspensions are proposed to be used in personal care applications (such as shampoos and conditioners) which also consist of surfactant formulations. Therefore, NCC suspensions would not be useful for applications that employ an oppositely charged surfactant. In order to prevent destabilization, poly (ethylene glycol) methacrylate (PEGMA) chains were grafted on the NCC surface to prevent the phase separation in presence of a cationic surfactant. Grafting was carried out using the free radical approach. The NCC-TTAB polymer surfactant interactions were studied via isothermal titration calorimetry (ITC), surface tensiometry, conductivity measurements, phase separation and zeta potential measurements. The major forces involve in these systems are electrostatic and hydrophobic interactions. ITC and surface tension results confirmed two kinds of interactions: (i) electrostatically driven NCC-TTAB complexes formed in the bulk and at the interface and (ii) hydrophobically driven TTAB micellization on the NCC rods. Conductivity and surface tension results confirmed that the critical micelle concentration of TTAB (CMCTTAB) shifted to higher values in the presence of NCC. Phase separation measurements allowed us to identify the formation of large aggregates or hydrophobic flocs depending on the TTAB concentration. Formation of NCC-TTAB complexes in aqueous solutions was confirmed by a charge reversal from negative to positive charge on the NCC rods. The effect of electrolyte in shielding the negative charges on the NCC was observed from ITC, surface tensiometry and phase separation experiments. Several mechanisms have been proposed to explain the above results. Grafting of PEGMA on the NCC surface was confirmed using FTIR and ITC experiments. In phase separation experiments NCC-g-PEGMA samples showed greater stability in the presence of TTAB compared to unmodified NCC. By comparing ITC and phase separation results, an optimum grafting ratio (PEGMA : NCC) for steric stabilization was also proposed.