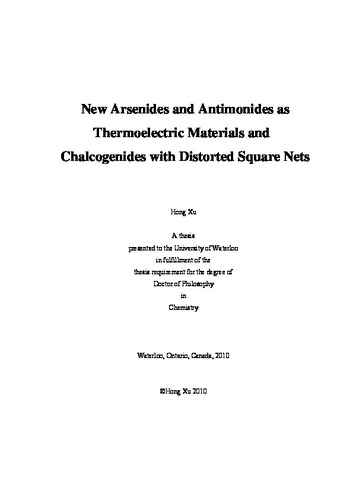 Thermoelectric (TE) materials can be ranked by their figure-of-merit, ZT, which is defined as ZT = (S2σT)/κ. Herein, T is the average temperature between the cold (TC) and hot sides (TH) of the thermoelectric device, S is the Seebeck coefficient, σ and κ are electrical and thermal conductivity, respectively. Presently, the applications of TE devices are limited by their low energy conversion efficiencies. The energy conversion efficiency includes the Carnot term [(TH-TC)/TC], an unattainable upper limit of efficiency for any real system, and a loss term, which depends on the ZT value. A larger temperature difference will produce a larger Carnot efficiency, and a higher ZT value will improve the loss efficiency. Thus, the combination of a larger temperature difference and higher ZT will lead to higher energy conversion efficiency, e.g. with ZT = 1, TH = 1000 K, TC = 300K, the efficiency can reach 17%. It is therefore important to explore TE materials that can be used at high temperatures (around 1000 K). Unfortunately there are very few materials that are stable and efficient under such strict conditions. Our group commenced an investigation of the Ir3Ge7 family materials in the late 1990s. My thesis work had been focused on the synthesis and optimization of Mo3Sb7-xTex and Re3(Si, Ge, Sn, Pb)xAs7-x, the ternary substitution variants of Mo3Sb7 and Re3As7. They exhibited the semiconductivity by partial Sb/Te or (Si, Ge, Sn, Pb)/As exchange, as predicted by electronic structure calculations (linear muffin-tin orbital method) and confirmed by physical property measurements. Furthermore, some transition metal atoms with the proper size, such as Fe, Co, Ni, and Cu, were intercalated into the existing cubic voids of the crystal structure in an attempt to reduce the phonon conductivity. Rietveld refinements using GSAS software were employed to analyze the (Si, Sn, Pb)/As ordering and distribution preference. Partial characterizations were conducted at University of Waterloo on cold-pressed pellets. The high temperature measurements were performed on hot-pressed pellets at Clemson University. Another project I worked on was about how to open a band gap by changing the bonding interactions. Some compounds containing the layered square nets structure may behave like a metal or like a semimetal. A band gap can be opened by distorting the square net into less symmetric layers, containing cis–trans or zig–zag chains, resulting in changes of the electronic structure around the Fermi level, therefore widening or opening a band gap. In some pnictide compounds, regular planar square nets of pnictogen atoms with half (“hypervalent” one-electron) bonding are prone to undergo Peierls distortions. Such materials are of great interest for thermoelectric energy conversion because the narrow band gap is advantageous for high-performance thermoelectric properties. The ternary and quaternary chalcogenides, LaAsSe and LaCuxAsSe, were prepared and investigated in this thesis. Seebeck coefficient measurements proved they are semiconductors. Rietveld refinements indicated the As atoms adopt a cis-trans distortion, which changes the structure type from ZrSiS (space group P4/nmm) to GdPS (space group Pnma). Consequently, a band gap is opened, in accordance with the electronic structure calculation. Single crystal structure determination showed LaCu0.12(1)AsSe adopts a derivative structure of the ZrSiS type, with deficient Cu sites inserted between La and As layers. The refinement based on As split sites is preferred.