Cognitive-Empowered Femtocells: An Intelligent Paradigm of a Robust and Efficient Media Access 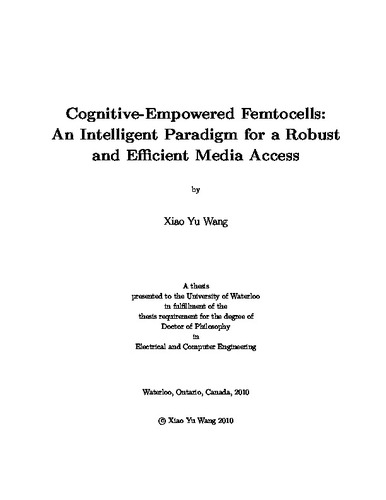 Driven by both the need for ubiquitous wireless services and the stringent strain on radio spectrum faced in today's wireless communications, cognitive radio (CR) have been investigated as a promising solution to deploy Wireless Regional Area Networks (WRANs) for an efficient spectrum utilization. Communication devices with CR capabilities are able to access spectrum bands licensed for other wireless services in an opportunistic and secondary fashion, while preventing harmful interference to incumbent licensed services. However, a lesson learned from early experiences in developing such macro-cellular networks is that it becomes increasingly less economically viable to develop CR macrocellular infrastructures for increasing data rates in both line-of-sight as well as non-line-of-sight situation of WRAN, and the corresponding quality of service (QoS) in macrocellular networks is also noticeably degraded due to path loss, shadowing, and multipath fading due to wall penetration. Moreover, there are several challenges to make the real-world CR enabling dynamic spectrum access a difficult problem to implement without harmful interference. First, the hardware design of cognitive radio on the physical layer involves the tuning over a broad range of spectrum to detect a weak signal in a dynamic environment of fading channels, which in turn makes identification of the spectrum opportunities hard to achieve in an efficient and accurate manner. Second, opportunistic media access based on imperfect spectrum usage information obtain from physical layer brings up undesirable interference issue, as well as reliability issues introduced by mutual interference. Third, the curial issue is to determine which channels to use for data transmissions in presence of the dynamic and opportunistic nature of wireless environments, in the case where pre-defined dedicated control channel is not available in the complex and heterogenous networks. In this dissertation, a novel framework called Cognitive-Empowered Femtocell (CEF), which combines CR techniques with femtocell networking, is introduced to tackle these challenges and achieve better spectrum reuse, lower interference, easy integration, wider network coverage, as well as fast and cost effective early stage WRAN. In this framework, a sensing coordination scheme is proposed to gracefully unshackles the master/slave relationship between central controllers and end users, while maintaining order and coordination such that better sensing precision and efficiency can be achieved. As such, the network intelligence can be expanded from controlling the intelligence paradigm to better understand the satisfy wireless user needs. We also discuss design and deployment aspects such as sensing with reasoning approach, gossip-enabled stochastic media access without a dedicated control channel, all of which are important to the success of the CEF framework. We illustrate that such a framework allows wireless users to intelligently capture spectrum opportunities while mitigating interference to other users, as well as improving the network capacity. Performance analysis and simulations were conducted based on these techniques to provide insight on the future direction of interference suppression for dynamic spectrum access.