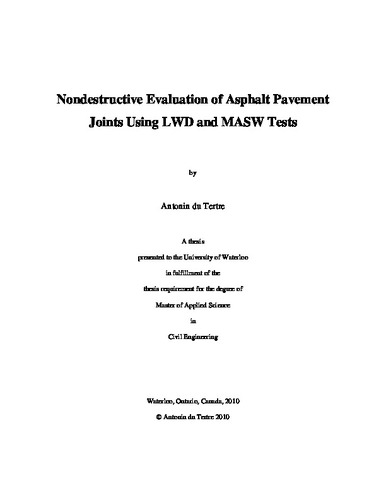 Longitudinal joints are one of the critical factors that cause premature pavement failure. Poor-quality joints are characterized by a low density and high permeability; which generates surface distresses such as ravelling or longitudinal cracking. Density has been traditionally considered as the primary performance indicator of joint construction. Density measurements consist of taking cores in the field and determining their density in the laboratory. Although this technique provides the most accurate measure of joint density, it is destructive and time consuming. Nuclear and non-nuclear gauges have been used to evaluate the condition of longitudinal joint non-destructively, but did not show good correlation with core density tests. Consequently, agencies are searching for other non-destructive testing (NDT) options for longitudinal joints evaluation. NDT methods have significantly advanced for the evaluation of pavement structural capacity during the past decade. These methods are based either on deflection or wave velocity measurements. The light weight deflectometer (LWD) is increasingly being used in quality control/quality assurance to provide a rapid determination of the surface modulus. Corresponding backcalculation programs are able to determine the moduli of the different pavement layers; these moduli are input parameters for mechanistic-empirical pavement design. In addition, ultrasonic wave-based methods have been studied for pavement condition evaluation but not developed to the point of practical implementation. The multi-channel analysis of surface waves (MASW) consists of using ultrasonic transducers to measure surface wave velocities in pavements and invert for the moduli of the different layers. In this study, both LWD and MASW were used in the laboratory and in the field to assess the condition of longitudinal joints. LWD tests were performed in the field at different distances from the centreline in order to identify variations of the surface modulus. MASW measurements were conducted across the joint to evaluate its effect on wave velocities, frequency content and attenuation parameters. Improved signal processing techniques were used to analyze the data, such as Fourier Transform, windowing, or discrete wavelet transform. Dispersion curves were computed to determine surface wave velocities and identify the nature of the wave modes propagating through the asphalt pavement. Parameters such as peak-to-peak amplitude or the area of the frequency spectrum were used to compute attenuation curves. A self calibrating technique, called Fourier transmission coefficient (FTC), was used to assess the condition of longitudinal joints while eliminating the variability introduced by the source, receivers and coupling system. A critical component of this project consisted of preparing an asphalt slab with a joint in the middle that would be used for testing in the laboratory. The compaction method was calibrated by preparing fourteen asphalt samples. An exponential correlation was determined between the air void content and the compaction effort applied to the mixture. Using this relationship, an asphalt slab was prepared in two stages to create a joint of medium quality. Nuclear density measurements were performed at different locations on the slab and showed a good agreement with the predicted density gradient across the joint. MASW tests were performed on the asphalt slabs using different coupling systems and receivers. The FTC coefficients showed good consistency from one configuration to another. This result indicates that the undesired variability due to the receivers and the coupling system was reduced by the FTC technique. Therefore, the coefficients were representative of the hot mix asphalt (HMA) condition. A comparison of theoretical and experimental dispersion curves indicated that mainly Lamb waves were generated in the asphalt layer. This new result is in contradiction with the common assumption that the response is governed by surface waves. This result is of critical importance for the analysis of the data since MASW tests have been focusing on the analysis of Rayleigh waves. Deflection measurements in the field with the LWD showed that the surface modulus was mostly affected by the base and subgrade moduli, and could not be used to evaluate the condition of the surface course that contains the longitudinal joints. The LWDmod software should be used to differentiate the pavement layers and backcalculate the modulus of the asphalt layer. Testing should be performed using different plate sizes and dropping heights in order to generate different stress levels at the pavement surface and optimize the accuracy of the backcalculation. Finally, master curves were computed using a predictive equation based on mix design specifications. Moduli measured at different frequencies of excitation with the two NDT techniques were shifted to a design frequency of 25 Hz. Design moduli measured in the field and in the laboratory with the seismic method were in good agreement (less than 0.2% difference). Moreover, a relatively good agreement was found between the moduli measured with the LWD and the MASW method after shifting to the design frequency. In conclusion, LWD and MASW measurements were representative of HMA condition. However, the condition assessment of medium to good quality joints requires better control of the critical parameters, such as the measurement depth for the LWD, or the frequency content generated by the ultrasonic source and the coupling between the receivers and the asphalt surface for the MASW method.