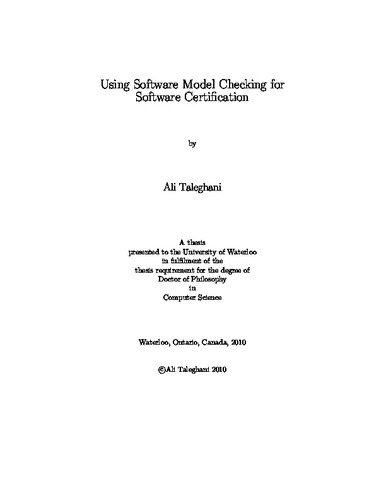 Software certification is defined as the process of independently confirming that a system or component complies with its specified requirements and is acceptable for use. It consists of the following steps: (1) the software producer subjects her software to rigorous testing and submits for certification, among other documents, evidence that the software has been thoroughly verified, and (2) the certifier evaluates the completeness of the verification and confirms that the software meets its specifications. The certification process is typically a manual evaluation of thousands of pages of documents that the software producer submits. Moreover, most of the current certification techniques focus on certifying testing results, but there is an increase in using formal methods to verify software. Model checking is a formal verification method that systematically explores the entire execution state space of a software program to ensure that a property is satisfied in every program state. As the field of model checking matures, there is a growing interest in its use for verification. In fact, several industrial-sized software projects have used model checking for verification, and there has been an increased push for techniques, preferably automated, to certify model checking results. Motivated by these challenges in certification, we have developed a set of automated techniques to certify model-checking results. One technique, called search-carrying code (SCC), uses information collected by a model checker during the verification of a program to speed up the certification of that program. In SCC, the software producer's model checker performs an exhaustive search of a program's state space and creates a search script that acts as a certificate of verification. The certifier's model checker uses the search script to partition its search task into a number of smaller, roughly balanced tasks that can be distributed to parallel model checkers, thereby using parallelization to speed up certification. When memory resources are limited, the producer's model checker can reduce its memory requirements by caching only a subset of the model-checking-search results. Caching increases the likelihood that an SCC verification task runs to completion and produces a search script that represents the program's entire state space. The downside of caching is that it can result in an increase in search time. We introduce cost-based caching, that achieves an exhaustive search faster than existing caching techniques. Finally, for cases when an exhaustive search is not possible, we present a novel method for estimating the state-space coverage of a partial model checking run. The coverage estimation can help the certifier to determine whether the partial model-checking results are adequate for certification.