Fallen and Changed: Tracing the Biblical-Mythological Origins of Mikhail Bulgakov's Azazello and Korov'ev 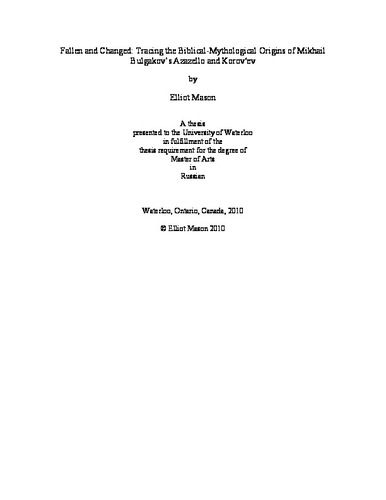 In his analysis of Mikhail Bulgakov’s The Master and Margarita, Elliot Mason explores the biblical and mythological ancestry of two of the novel’s most under-studied demonic characters: Azazello and Korov′ev-Fagot. Both characters, it is argued, serve important thematic roles within The Master and Margarita, acting as symbols of the oppressed artist, creativity and judgement. Azazello and Korov′ev-Fagot are integral to an eschatological reading of the text, with Korov′ev in particular suggesting new areas of Faustian influence within The Master and Margarita. Azazello’s relevance to the novel is discussed in terms of his relationship with another of Bulgakov’s characters: the demon Abaddon. Through an examination of the biblical, literary and mythological development of the myth of the Azazel-figure throughout history, Mason argues a thematic, and perhaps even more tangible, connection between the two characters. In the context of Bulgakov’s novel, it is argued, Azazello and Abaddon are interrelated, and it is this relationship that sheds new light on the thematic importance of either character to The Master and Margarita. An examination of older, non-canonical biblical texts allows the connection between Azazel and Abaddon to be explored and applied to Bulgakov’s novel. It is argued that Bulgakov himself, upon reading the texts studied, came to many of the same conclusions, and that these conclusions resulted in the connectedness of Azazello and Abaddon within The Master and Margarita. The second chapter of Mason’s study is devoted to tracing the heritage of the character, Kovo′ev-Fagot. A number of references and clues within The Master and Margarita are suggestive of the fact that Bulgakov had a particular literary, mythological or contemporary figure in mind when he created the character. Despite these references, Bulgakovian scholars have so far been unable to identify precisely whom Bulgakov was drawing on as inspiration for Korov′ev. Using the information provided by The Master and Margarita, Mason argues for a reading of Korov′ev-Fagot as the biblical, mythological sea-beast, Leviathan. He further links the character with Mephistopheles, finding a connection between Leviathan and Mephistopheles in a lesser-known version of the Faust legend, which replaces the name of one with the other. An overview of Leviathan’s eschatological and thematic functions, as well as his relationship with Egyptian and Norse chaos serpents, is used in order to provide the demonological background of the figure to a potentially non-specialist audience. The themes explored in this section of the argument are then applied to The Master and Margarita itself, in order to better understand the intended role of Korov′ev-Fagot to Bulgakov’s work. The identification of Korov′ev-Fagot with Leviathan and Mephistopheles, as well as that of Azazello with Abaddon, serves as a foundation of information, compiled in order that future interpretations may hopefully draw from it.