Examination of the effect of the natural plant extract, withaferin A, on heat shock protein gene expression in Xenopus laevis A6 cells 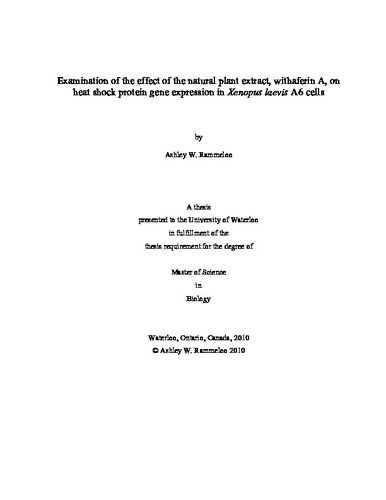 In eukaryotes, the ubiquitin-proteasome system (UPS) degrades most cellular protein. Inhibition of the UPS has been associated with different disease states and can affect various intracellular processes including the activation of heat shock protein (hsp) gene expression. During cellular stress, HSPs act as molecular chaperones by inhibiting protein aggregation and assisting in their refolding once normal conditions are re-established. In the present study, Withaferin A (WA), a steroidal lactone with possible anti-inflammatory and antitumor properties, was found to inhibit proteasome activity and induce the expression of hsp genes in the amphibian model system, Xenopus laevis. Treatment of Xenopus kidney epithelial A6 cells with WA produced an increase in the accumulation of ubiquitinated protein and a significant decrease in chymotrypsin-like activity. Furthermore, immunoblot analysis revealed that WA induced HSP30 and HSP70 accumulation. For example, cells treated with 5 μM WA for 18 h resulted in the optimal accumulation of HSP30 and HSP70. Northern blot analysis revealed that exposure of cells to 5 μM WA induced hsp30 and hsp70 mRNA accumulation in a time-dependent manner up to 12 h. The activation of heat shock factor 1 (HSF1) DNA-binding may be involved in WA-induced hsp gene expression in A6 cells, since pretreatment with the HSF1 inhibitor, KNK437, reduced the accumulation of HSP30 and HSP70. Also, WA acted synergistically with mild heat shock to enhance HSP accumulation to a greater extent than the sum of both stressors individually. In cells recovering from WA, the relative levels of HSP30 and HSP70 accumulation remained elevated from 6 to 12 h after removal of WA. Immuocytochemical analysis and laser scanning confocal microscopy revealed that WA-induced HSP30 accumulation occurred primarily in the cytoplasm with some staining in the nucleus in a granular or punctate pattern. Prolonged exposure to WA resulted in some disorganization of the actin cytoskeleton as well as large cytoplasmic HSP30 staining structures in some cells. Prior exposure of cells to WA treatment conferred thermotolerance since it protected them against a subsequent thermal challenge at 37 °C. In conclusion, this study has shown that WA can induce an inhibition of proteasome activity and an increase hsp gene expression. Activating the heat shock response is a potential avenue for novel drug therapies, which can confer cytoprotection in disease states involving cytotoxic protein aggregation.

Ashley Rammeloo (2010). Examination of the effect of the natural plant extract, withaferin A, on heat shock protein gene expression in Xenopus laevis A6 cells. UWSpace. http://hdl.handle.net/10012/5479