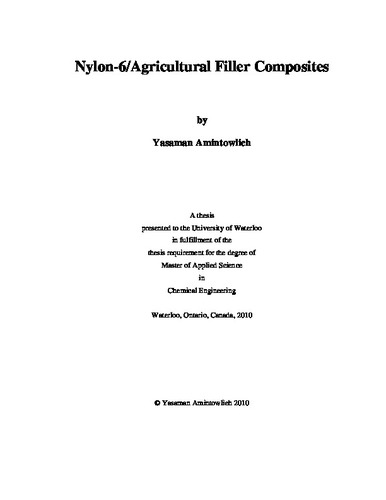 Preparation of thermoplastics composites using engineering thermoplastics and plant fibers or fillers is a technical challenge because the processing temperature of the thermoplastics is generally above the temperature of degradation of plant fibers of fillers. There have been numerous attempts for processing high melting point engineering thermoplastics like Nylon-6 with plant natural fibers and fillers. Low temperature processing methods, fiber modification or addition of additives which drops polymer melting point are some of proposed solutions for this problem. The objective of this thesis was to develop a formulation using wheat straw (WS) as a reinforcing fiber for Nylon-6. The concentration of WS was 15 wt-%. The thermoplastic composites were prepared by mixing grinded wheat straw and Nylon-6 using a laboratory scale twin-screw extruder; follow by preparation of samples using injection moulding. The strategy investigated in this thesis was utilization of additives to lower the melting point or to decrease the viscosity of Nylon-6. Lithium chloride salt (LiCl) and N-Butyl benzene Sulfon amide plasticizer (N-BBSA) were used as process additives to decrease melting point and to reduce the processing temperature and time. The addition of the wheat straw (15 wt-%) to the Nylon-6 increased modulus by 26.9 % but decreased the strength by 9.9 %. Effect of different level of these two additives on mechanical, thermal, physical properties and processability of the composite runs were studied. Addition of 4 wt-% LiCl was found to decrease the melting point from 222 °C to 191 °C, to increase modulus by 14 % in comparison to Nylon-6/wheat straw (15 wt-%). However, it decreased the processability and strength by 12.7 %. Plasticizer was investigated to easing processability and decreasing the degradation by reducing the residence time in the extruder, it does not affect the melting point of Nylon-6. The addition of 4 wt-% of plasticizer (N-BBSA) increased modulus and strength only by 2.6 % and 3 %, respectively, in comparison to Nylon-6/wheat straw (15 wt-%) composites. The results of mechanical properties were used as a benchmark for comparisons among samples with different formulations (levels of additives) to find out levels of LiCl and N-BBSA for the best mechanical properties. It was found that samples with 2 wt-% LiCl and 2 wt-% of N-BBSA had 29.3 % higher tensile modulus than neat Nylon-6, while its strength was almost same as neat Nylon-6 and 6.3 % higher than Nylon-6/WS (15 wt-%). These results were used to correlate the mechanical properties as a function of percentage of salt and plasticizer in the formulation. Differential scanning calorimetry (DSC) was used to evaluate the percentage of crystallinity and the melting point of the thermoplastic phase and thermal gravimetric analysis (TGA) was used to measure the thermal stability of different formulation. The kinetics of crystallization and degradation were evaluated using results from DSC and TGA, respectively. The activation energy for thermal degradation and the percentage of crystallinity of the thermoplastic composites were correlated to mechanical properties using linear regression. It was found that fiber degradation had a significant effect on strength but the effects of percentage of crystallinity on composites strength were insignificant. On the other hand, the percentage of crystallinity affects stiffness and impact strength. The ductility was a function of both crystallinity and thermal stability.