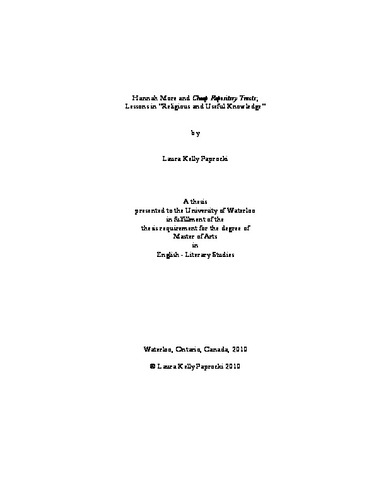 My thesis will discuss British Romantic period author and philanthropist Hannah More. I aim to portray her from a perspective that demonstrates her compelling and varying nature, that includes religion and rhetoric as persuasive tools met at times with resistance and at other times compliance. Her work called for educational reform on two accounts: firstly, for a system of education for the poor, and secondly, to reeducate middle and upper class women’s philanthropy. I focus on her didactic literature, namely Cheap Repository Tracts, and the prevalence of her Evangelical zeal embedded in the tracts. I draw particular attention to the stories of The Shepherd of Salisbury Plain, Black Giles the Poacher, and Betty Brown, the St. Giles’s Orange Girl. I argue that traditional understandings of didactic narratives as a low form of literature are misleading and that More’s work exemplifies didactic fiction as a form of literature capable of empowering readers and authors alike. Furthermore, I study the social function aspects of Cheap Repository Tracts as they demonstrated a newfound accessibility to a large and varying audience.