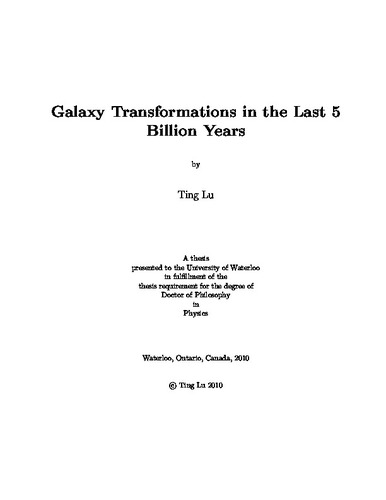 It has become clear that the global star formation rate in the Universe has been decreasing since at least z~1, and blue, star-forming galaxies are transformed into red, passive galaxies through one or more processes. The origin of this decline and transformation remains unclear. The role environment plays in all this is especially uncertain. Despite the observed domination of a passive population in the cores of clusters, in contrast to the more actively star-forming field population, whether or not, and how environment affects the properties of galaxies when they fall into clusters is an unsettled question. In this thesis, we look into these issues by examining both the passive and star-forming galaxies, from the cores out to the infall regions, in a large sample of clusters at 0.15<z<0.36 we detected from the Canada-France-Hawaii Telescope Legacy Survey (CFHTLS). We find that in the cores of clusters, the red-sequence galaxies are a mixture of two populations, indicated by the inflexion in their luminosity function. There is no strong evolution in the shape of the red-sequence between z~0.4 and z~0.2; however, from z~0.2 to today, there is a rapid increase in the number of faint galaxies on the red-sequence relative to the bright ones, suggesting a rapid quenching of the faint galaxies in cluster cores within the last few billion years. At z~0.2, we find that the red fraction (star-forming fraction), at all stellar mass explored (9.0<log10(M*/M_solar)<11.5), shows no dependence on the distance from cluster centres, in the range 3<r<7Mpc; but within the inner 3 Mpc, we see a clear increase (decrease) in the red fraction (star-forming fraction). Also, for the lowest stellar mass galaxies, their red fraction has increased by a factor of 2 from z~0.3 to z~0.2 (over 1 Gyr), and yet we do not detect any difference between the star formation properties of the star-forming galaxies in clusters at all radii and that in the field. This suggests that for the low mass galaxies, it is likely that a mechanism that truncates star formation rapidly (within 1 Gyr) is at work. In the outskirts of the clusters, despite the low density contrast with the field, the red fraction is still higher than that in the field, suggesting that those galaxies have had their star formation quenched relative to the field population, supporting the pre-processing scenario.