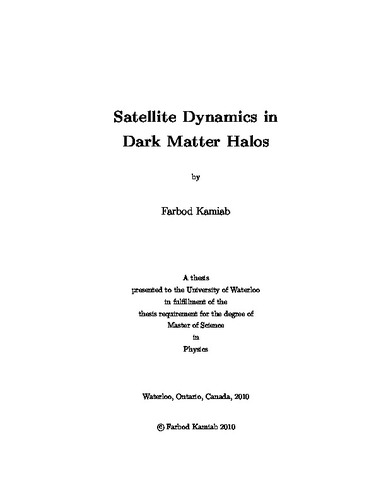 I have used an analytic model of tidal interactions to predict the evolution of a substructure in a static dark matter halo. Given the initial conditions of the satellite and background halo, the model predicts with high accuracy the mass loss of the satellite and also its density evolution. The main phenomena taken into account in the model are tidal truncation at the tidal radius of the satellite and heating due to tidal shocks at the pericenter of its orbit. To calibrate and test the model, it has been compared with numerical simulations of a satellite orbiting in a static dark matter halo. The model predicts a set of tidal radii for the satellite in different stages of its evolution. The mass of the satellite is accurately calculated at each stage by truncating an NFW (Navarro, Frenk and White) profile at the tidal radius. The mass lost beyond the tidal limit is scaled by half the instantaneous orbital period of the satellite. The model can also be used to predict analytically the new density profile of the satellite. This new profile is given by a modification of the NFW density profile as a function of radius. The tidal radius is the only parameter going into this modification. The effect of numerical relaxation has been studied and quantified by performing the same simulations in lower resolutions. I find that substructures with less than 1000 particles are artificially relaxed and this process affects their mass loss and results in their premature disruptions. This underlines the utility of an analytic model predicting the evolution of substructures in minor mergers.