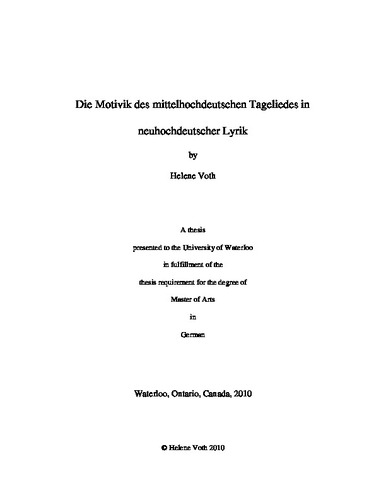 This thesis investigates the medieval genre of the Tagelied or dawn-song to examine its diachronic development from the Middle Ages to today. The genre in its origin is best represented by the Middle High German songs, Slâfest du, vriedel ziere by Dietmar von Aist, Owê, sol aber mir iemer mê by Heinrich von Morungen, Wolfram von Eschenbach‘s Den morgenblic bî wahtaers sange, Otto von Botenlauben‘s Wie sol ich den ritter nû gescheiden, as well as Ich wache umbe eines ritters lîp by Marktgraf von Hohenburg. All these songs exemplify the original motifs of the Middle-High-German “Tagelied.” The distinctiveness of this thesis is that it takes the medieval motifs – such as the separation of two lovers at dawn and the role of the watchman who announces the approach of day – as well as the thematics of sexual, gender, and class relations between the lovers to examine their reappearance in eleven New High German poems and songs, including works by Brentano, Goethe, Borchardt, Rilke and Rühmkorf. A number of folksongs from the Romantic era to today are also taken into consideration, including popular songs by such contemporary “medieval” German bands as Faun and Schandmaul. Each poem is analysed separately, whereby their intertextual connections are simultaneously drawn out. This approach not only shows that the motifs resurface up to the present but also, and even more importantly, how they have changed over the centuries. By looking at the poems and comparing them we are able to recognize important changes in society which strongly influence the poems’ contents. Of course, love, sexuality, gender, and class relations are still expressed in each poem, but they have undergone modifications over time. This thesis brings these changes into focus by analysing the development of the motifs step by step.