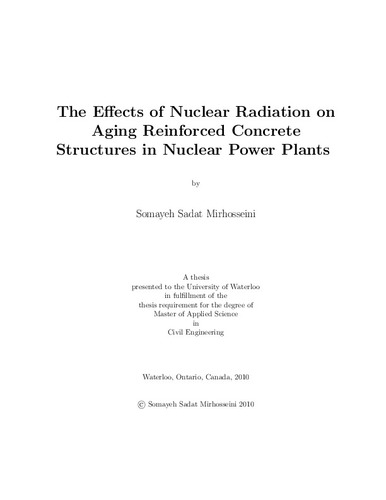 In this thesis we look at one of the aging mechanisms that may have affected current aged Nuclear Power Plants (NPPs). Irradiation as an age-related degradation mechanism is studied for Reinforced Concrete (RC) in NPPs. This problem can be important for aged reactor buildings, radwaste buildings, spent nuclear fuel, research reactors, or accelerators that experience high levels of radiation close to existing thresholds. Mechanical properties of concrete are the most important parameters affected by radiation in NPPs. Compressive strength of concrete is reduced between 80 and 35 \% for radiation fluences between $2\times 10^{19}$ and $2\times 10^{21} n/cm^2$. Tensile strength reduction is more significant than compressive strength. It is reduced between 20 and 80 \% for a radiation fluence equal to $5\times 10^{19}$. We chose three radiation levels $2\times 10^{19}$, $2\times 10^{20}$, $2\times 10^{20}$ based on experimental results as the critical levels of radiation that RC structures in NPPs may be exposed to. Structures susceptible to the problem are mostly RC walls; so the RC panel is chosen as an appropriate representative scale element for the analysis. The effect of radiation on mechanical properties of concrete is considered to analyze degraded scale elements. Material properties, geometry, and loading scenarios of scale elements are selected to be close to actual quantities in existing nuclear power plant. Elements are analyzed under six types of loading combination of shear and axial loading conditions. A nonlinear finite element program, Membrane-2000, based on the Modified Compression Field Theory (MCFT) is used to solve scale elements numerically. Element behaviors are studied considering the factors influence ultimate strength capacity, failure mode, and structural ductility index of members. The results show that ultimate shear capacity of the elements subjected to combinations of shear and tension loading are reduced significantly for highly reinforced elements ($1.35<\rho<1.88$) in $2\times 10^{21} n/cm^2$ radiation. RC panels under shear-biaxial and uniaxial compression also show significant strength capacity reduction in radiation levels $2\times 10^{20} n/cm^2$ and $2\times 10^{21} n/cm^2$, respectively. Failure modes of the elements change from yielding of steel to shear failure by increasing level of degradation for the elements with reinforcement ratio between 0.9 and 1.88. Ductility of the RC panels is reduced significantly in the critical levels of radiation. Ductility of the elements became less than the allowable ductility value by increasing level of radiation.