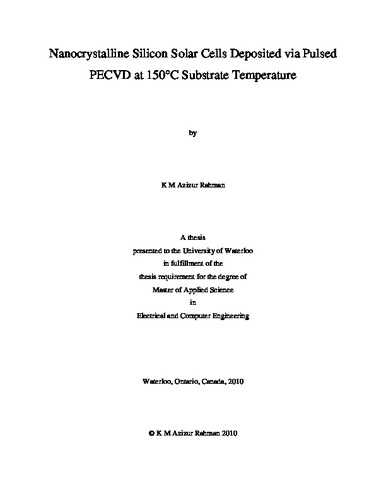 A series of experiments was carried out to compare the structural and electronic properties of intrinsic nanocrystalline silicon (nc-Si:H) thin films deposited via continuous wave (cw) and pulsed (p)-PECVD at 150°C substrate temperature. Working at this temperature allows for the easy transfer of film recipes from glass to plastic substrates in the future. During the p-PECVD process the pulsing frequency was varied from 0.2 to 50 kHz at 50% duty cycle. Approximately 15% drop in the deposition rate was observed for the samples fabricated in p-PECVD compared to cw-PECVD. The optimum crystallinity and photo (σph) and dark conductivity (σD) were observed at 5 kHz pulsing frequency, with ~10% rise in crystallinity and about twofold rise in the σph and σD compared to cw-PECVD. However, for both the cw and p-PECVD nc-Si:H films, the observed σph and σD were one to two orders and three orders of magnitude higher respectively than those reported in literature. The average activation energy (EA) of 0.16 ∓ 0.01 eV for nc-Si:H films deposited using p-PECVD confirmed the presence of impurities, which led to the observation of the unusually high conductivity values. It was considered that the films were contaminated by the impurity atoms after they were exposed to air. Following the thin film characterization procedure, the optimized nc-Si:H film recipes, from cw and p-PECVD, were used to fabricate the absorber layer of thin film solar cells. The cells were then characterized for J-V and External Quantum Efficiency (EQE) parameters. The cell active layer fabricated from p-PECVD demonstrated higher power conversion efficiency (η) and a maximum EQE of 1.7 ∓ 0.06 % and 54.3% respectively, compared to 1.00 ∓ 0.04 % and 48.6% respectively for cw-PECVD. However, the observed η and EQE of both the cells were lower than a reported nc-Si:H cell fabricated via p-PECVD with similar absorber layer thickness. This was due to the poor Short-circuit Current Density (Jsc), Open-circuit Voltage (Voc), and Fill Factor (FF) of the cw and p-PECVD cells respectively, compared to the reported cell. The low Jsc resulted from the poor photocarrier collection at longer and shorter wavelengths and high series resistance (Rseries). On the other hand, the low Voc stemmed from the low shunt resistance (Rsh). It was inferred that the decrease in the Rsh occurred due to the inadequate electrical isolation of the individual cells and the contact between the n – layer and the front TCO contact at the edge of the p-i-n deposition area. Additionally, the net effect of the high Rseries and the low Rsh led to a decrease in the FF of the cells.