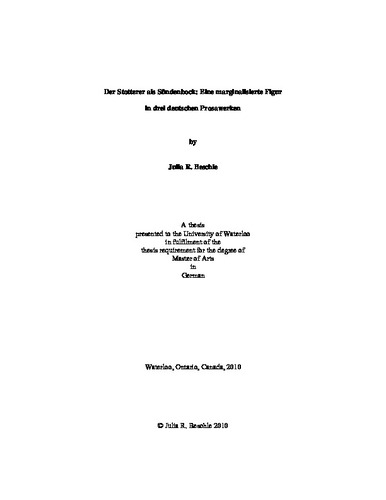 The character of the stutterer in three works of German literature is the focus of this master’s thesis, Der Stotterer als Sündenbock: Eine marginalisierte Figur in drei deutschen Prosawerken. Two novels and one story were chosen for this project: Alfred Döblin’s Berlin Alexanderplatz. Die Geschichte von Franz Biberkopf, published in 1929; Gottesdiener by Petra Morsbach, published in 2004; and “Der Stotterer” by Lutz Seiler, published in 2009. These works were chosen because they are among the few that portray stuttering characters in major, rather than in peripheral, roles. The main goal of the thesis is to examine the characteristics of stuttering and the portrayal of the three stutterers. On the basis of four categories concerning the phenomenon of stuttering, a detailed analysis of these three characters is provided. These categories examine the symptomatology of stuttering itself and the contentious explanations of its origins. The effects of stuttering on the social-psychological level are also of great interest. Further, the analysis will examine the theme of healing, and the effects on the narrative of the stutterers’ self-aware reflection on their condition, or lack of such reflection. On a second interpretative level, two theoretical works are applied to the characteristics of the stutterers. The first is the theory and definition of ‘stigma’ by American sociologist Erving Goffman in his work Stigma: Notes on the Management of Spoiled Identity (1963). This will be used to identify characteristics that mark the stutterer in a negative way. The second theoretical work is Der Sündenbock (Le Bouc émissaire; 1988), written by the French historian and critic René Girard. On the basis of Girard’s work, the hypothesis is put forward that all three stutterers show characteristics of the scapegoat. The interpretations of the stutterers as scapegoats are thus based on the stigma (in Goffman’s terms) and criteria of victims or sacrifices (in Girard’s terms). Furthermore, these two theoretical works are connected by the notion that differences and deviations are important for the maintenance of norms in society. One of the results is that there seems to be an increasing tendency to describe the attribute of stuttering as a ‘normal’ attribute. The stutterer nonetheless remains a marginalized character in all three literary texts. Moreover, all three of the analyzed stutterers can be shown to demonstrate different aspects of the scapegoat complex, thus making the maintenance of normal society dependent upon their sacrifice.