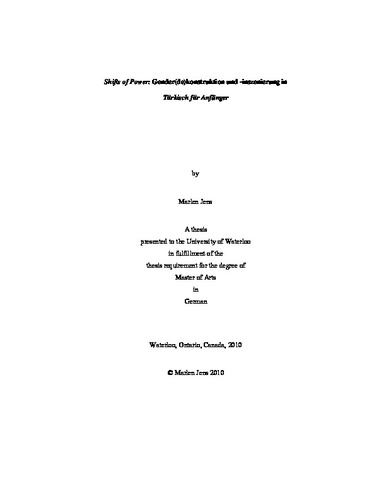 Between 2006 and 2008 the German television series “Türkisch für Anfänger“ (Turkish for Beginners) about the life of a multiculturally blended family in Berlin was aired on the television network ARD. This thesis analyzes the gender construction of the six main characters in order to find out which concepts of gender they mirror, and how they perform their gender identities. This analysis of gender is carried out in close interaction with other categories of identity such as ethnicity or age. The theoretical foundation for the study is feminist post-structuralist discourse analysis (FPDA), which is interested in the multiple power relations in which individuals are embedded in their social interactions. These structures of power are reflected in their gender constructions. The approach assumes that in each situation several competing discourses are available for individuals within which they need to position themselves. With the help of the FPDA this master’s thesis investigates these discoursive structures subjects adopt to negotiate their relationships and identities. In addition, the thesis relies on Erving Goffman’s concept of face-work and his metaphor of playing a role in social interaction which is meant to be a theatrical stage. His work is applied to the gender construction of the subjects mainly to underline that gender also needs to be performed. The gender construction of the six characters is analyzed on three different levels: their language use, their nonverbal behaviour, and camera editing. Therefore the analysis focuses on verbal communication, nonverbal behaviour and paralinguistic features, and the media components. The analysis of eleven selected scenes shows that the gender constructions of the characters and the performance of those constructions are not stable, but rather fluid. They continuously shift between different gender identities, sometimes positioning themselves at the same time as powerful and powerless within and towards varying discourses. Thus each character constructs a number of different gender identities during the course of the series, as well as within particular scenes.