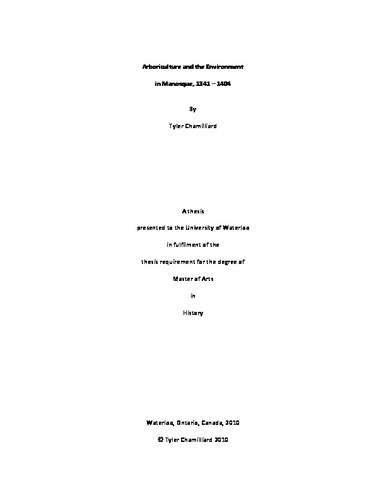 This thesis uses records of criminal inquisitions from 1341 to 1404 to take up the question of medieval environmental consciousness. These records were created in the Provençal town of Manosque. The town’s region extended along six kilometres of the Durance river-valley, and is home to an ecosystem unique to the south of France and to the Mediterranean. This ecosystem was intelligibly manipulated through human industry to support, in part, a pre-plague population of about five thousand inhabitants. The statutes and privileges granted to the town illustrate a unique community, governed by the local commander of the Knights of St. John of Jerusalem and negotiated through the efforts of the burgess elites, who were predominantly local merchants and notaries. Over the period of 1341 to 1404, the court dealt with twenty-eight tree-related crimes, including theft, damage, cutting, arson, disagreement, and assault of the Manosquin arboriculture. The court’s stated intention with these cases was to regulate deviant behaviour in regards to the established customs of property. Along with the addition of a corpus of modern environmental scholarship, a nuanced interpretation of the medieval European economy appears, in which the balance, or imbalance of human interaction with the environment play a critical role. So, the basic question posed herein is this: what can the conflicts of fourteenth-century rural inhabitants offer to modern scholars in search of pre-industrial environmental awareness?