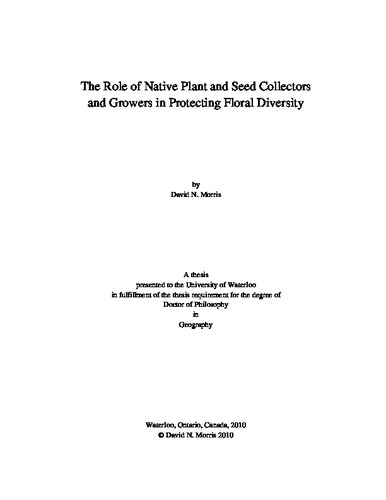 The planting of native species is a common strategy for the conservation of biodiversity; it not only allows for the restoration of degraded habitat both within conservation reserves and the matrix lands between reserves, it supplements the populations of the floral species which are planted. These supplemental populations may play an important role in providing demographic security for rare species. However, the conservation of rare species depends on more than simply maintaining adequate numbers of the species: the diversity within the species must also be conserved. Although maintaining genetic diversity is increasingly a concern for formal species recovery efforts, there has been very little research done about the diversity within plantings by non-state actors. This research was undertaken to address this knowledge gap by studying the provenances of planted rare species and the activities of those who collect and grow these plants. This research was undertaken in the Carolinian zone of southern Ontario, a region with a large number of rare plant species and a large human population. Part of this study utilized semi-structured interviews with commercial seed collectors, commercial native plant growers, and non-commercial, hobbyist growers. A variety of factors limited the diversity with the seeds collected by commercial collectors. Due to difficulty in accessing information about the natural occurrences of rare species, collectors typically collected from the same, limited number of source plants. Trespassing on private property or protected lands was common to access these seed sources, although their preference for easily accessible, reliably fecund source plants on flat, mowed sites also meant that horticultural specimens were also desired. Many of these biases were passed on to commercial growers when the seed was sold by the commercial collectors. Commercial growers shared many collection practices with commercial collectors, creating similar restrictions on the diversity within their collections. However, further limitations in diversity were also created by the growers’ establishment of small populations of seed plants and by the trading of seeds and plants between growers. One boutique grower was a dominant source of seeds and plants in these trades. The limitations in the diversity within these rare species were passed onto those who purchased and planted them. This study also focused on enthusiastic native plant hobbyists and found that they not only purchased plants but collected and grew their own plants. They also traded with other hobbyists. Much of the information about where to collect seed or plants, as well as much of the seed or plants traded between hobbyists, originated with a key individual. Thus, this champion hobbyist plays a significant role in the character of planted examples of rare plant species and the genetics of the champion’s plants are heavily represented with other planted occurrences. The practices of commercial seed collectors, growers and native plant hobbyists create biases which limit the diversity within plantings of rare species. Although these plantings provide demographic security for these species, they do not represent the diversity within their remnant “wild” populations. Thus, important questions must be raised about the conservation value of these plantings. Since many of the practices of seed collectors and growers are also used when growing more common species, the diversity within plantings of these species should also be suspect. Although the lack of diversity within common species may not threaten the regional survival of the species in the short term, it may impact the ultimate success of restoration projects.