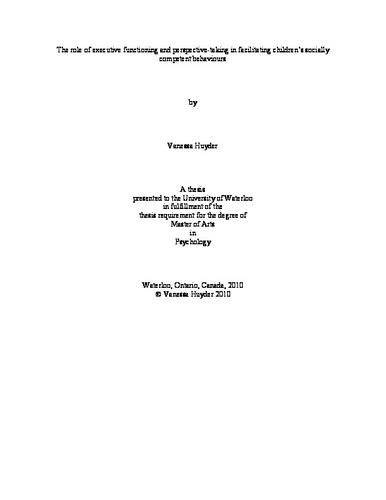 Behaving in a socially competent manner (i.e., interacting with other social actors in an effective manner by adjusting one’s goals and behaviours according to the demands of various social situations) is a complex process that requires various cognitive skills. The purpose of the current study was to determine the unique contributions of executive functions, theory of mind and verbal skills to socially competent behaviours in either a cooperative or a competitive context. The impact of manipulating children’s perspective-taking (e.g., taking the perspective of another person) on their socially appropriate behaviours was also investigated. Pairs of children completed a cooperative and a competitive social task together and were assigned to either focus on their own or another’s perspective. Children then completed measures of executive functioning, theory of mind, and verbal skills. Results revealed that executive functioning was related to more appropriate social behaviours in the cooperative task, even when controlling for theory of mind and verbal skills; however, this relation was not found in the competitive task. Furthermore, there was no significant effect of the manipulation of perspective-taking on children’s behaviours. These findings indicate that executive functions make a unique contribution to children’s socially competent behaviours in a cooperative social context.