Disorder, Geometric Frustration and the Dipolar Interaction in Rare-Earth Magnets 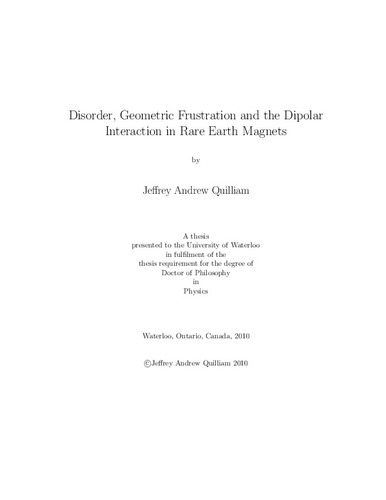 This thesis will present research that studies the role of disorder, geometric frustration and the long range dipolar interaction on the collective behaviour of several insulating, rare earth magnets. Experiments were performed at low temperatures to measure the specific heat and magnetic susceptibility of several materials. Susceptibility was measured with a SQUID magnetometer that has been designed and constructed primarily for the study of slow dynamics in glassy systems. Specifically, this thesis will discuss three distinct topics. The first is the series of materials LiHo(x)Y(1-x)F(4), which are manifestations of the dilute, dipolar coupled Ising model. The low-x portion of the phase diagram has become a rather contentious issue in recent years with both theoretical and experimental groups disagreeing on the existence of a spin glass freezing transition and one experimental group arguing for the existence of an exotic "antiglass'' or spin liquid state resulting from quantum entanglement at x=0.045. We present specific heat and dynamical susceptibility measurements on four stoichiometries in this series: x = 0.018, 0.045, 0.080 and 0.012. No evidence of an unusual antiglass state is observed. Instead, our results show evidence, at all dilution levels studied, of a spin glass freezing transition. Interpretation of experimental data is found to be complicated by the anomalously slow dynamics in these materials. The relaxation time scales are found to increase as the concentration of Ho(3+) ions is reduced, an effect which can be attributed to single-ion physics and the importance of the nuclear hyperfine coupling in this system. A second set of materials studied here is a series of several Gd garnet materials, the most famous of which is Gd(3)Ga(5)O(12) (GGG), a material previously argued to be a disorder-free spin glass. Our specific heat experiments reproduce previous experiments on GGG and show that the homologous Gd garnets Gd(3)Te(2)Li(3)O(12) and Ga(3)Al(5)O(12) do not share the same glassy physics but exhibit sharp ordering features. By experimenting with the introduction of random site dilution, it is concluded that a 1-2% off-stoichiometry inherent in GGG is likely a special kind of disorder that is particularly effective in inducing random frustration and the formation of a spin glass. Finally, specific heat measurements on the pyrochlore antiferromagnet Gd(2)Sn(2)O(7) (GSO) are presented. While GSO has generally been found to be a well behaved and well understood model magnet, with long range order developing at around 1 K, like many other geometrically frustrated magnets, it has been discovered to possess persistent spin dynamics down to very low temperatures as measured by μSR and Mössbauer spectroscopy. Measurement of the low temperature limit of the specific heat when compared with linear spin-wave theory, however, presents a consistent picture of gapped magnon excitations that freeze out at low temperatures and make the existence of the proposed dynamic ground state unlikely.