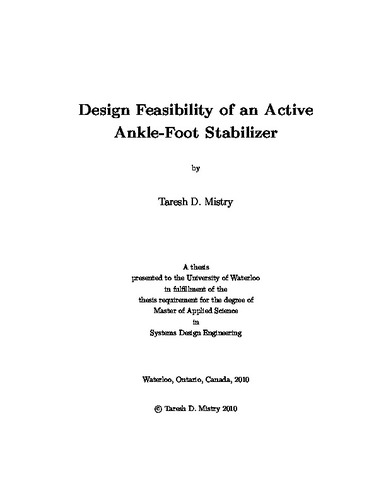 Walking is the most common form of mobility in humans. For lower limb mobility impairments, a common treatment is to prescribe an ankle-foot orthosis (AFO) or brace, which is a passive device designed to resist undesired ankle-foot motion. Recent advances in actuator technology have led to the development of active AFOs (AAFOs). However, these devices are generally too bulky for everyday use and are limited to applications such as gait training for rehabilitation. The aim of this research was to investigate the feasibility of developing a novel Active Ankle-Foot Stabilizer (AAFS). The design criteria were mainly based on the strengths and limitations of existing AFOs. The sagittal plane functional requirements were determined using simulated gait data for elderly individuals and drop foot patients; however, it is intended that the device would be suitable for a wider range of disabilities including ankle sprains. A model of the foot was introduced to modify the moment of a deficient ankle where young healthy adult kinematics and kinetics were assumed. A moment deficit analysis was performed for different gait periods resulting in an AAFS model with two components: a linear rotational spring to modify the ankle joint rotational stiffness, and a torque source. The frontal plane functional requirements for the AAFS were modeled as a linear rotational spring which responded to particular gait events. A novel Variable Rotational Stiffness Actuator (VSRA) AFO was also investigated. It consisted of an actuated spring medial and lateral to the ankle to control sagittal plane ankle stiffness and a passive leafspring posterior to the ankle to control frontal plane ankle stiffness. Due to high forces and profile limitations, a spring and rotation actuator that satisfied the design criteria could not be developed, resulting in an infeasible design. Considering the high forces and moments required by the AAFS, a pneumatic approach was adopted. A novel Airbeam AFO, which consisted of a shank cuff and a foot plate to which airbeams were attached proximally and distally to the ankle, was examined. The joint rotational stiffness of the ankle would be controlled by the inflation of these individual cylindrical airbeams. To satisfy the functional requirements, the airbeam diameters and pressures were too large to meet the design criteria and were unrealistic for a portable device. Finally, a Pneumatic Sock AFO, which proved to best satisfy the functional requirements within the design criteria, was examined. The design consisted of an inner sock worn on the ankle, surrounded by anterior, posterior, medial, and lateral bladders which inflate against outer fabric shells. Although promising, the Pneumatic Sock AFO requires further investigation in regards to manufacturing and behaviour characterization before a functional prototype can be developed. Mechanical test methods to characterize the behaviour of the Pneumatic Sock AFO in the sagittal and frontal planes were developed including the control components required, the configuration of a test rig, and test procedures.