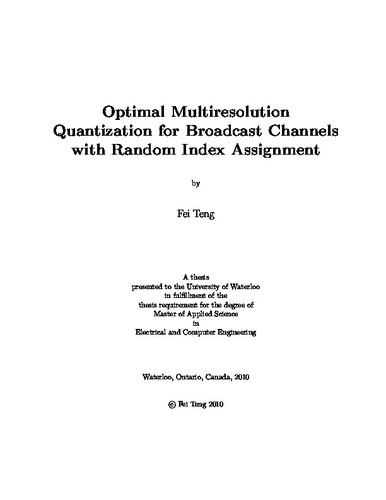 Shannon's classical separation result holds only in the limit of infinite source code dimension and infinite channel code block length. In addition, Shannon theory does not address the design of good source codes when the probability of channel error is nonzero, which is inevitable for finite-length channel codes. Thus, for practical systems, a joint source and channel code design could improve performance for finite dimension source code and finite block length channel code, as well as complexity and delay. Consider a multicast system over a broadcast channel, where different end users typically have different capacities. To support such user or capacity diversity, it is desirable to encode the source to be broadcasted into a scalable bit stream along which multiple resolutions of the source can be reconstructed progressively from left to right. Such source coding technique is called multiresolution source coding. In wireless communications, joint source channel coding (JSCC) has attracted wide attention due to its adaptivity to time-varying channels. However, there are few works on joint source channel coding for network multicast, especially for the optimal source coding over broadcast channels. In this work, we aim at designing and analyzing the optimal multiresolution vector quantization (MRVQ) in conjunction with the subsequent broadcast channel over which the coded scalable bit stream would be transmitted. By adopting random index assignment (RIA) to link MRVQ for the source with superposition coding for the broadcast channel, we establish a closed-form formula of end-to-end distortion for a tandem system of MRVQ and a broadcast channel. From this formula we analyze the intrinsic structure of end-to-end distortion (EED) in a communication system and derive two necessary conditions for optimal multiresolution vector quantization over broadcast channels with random index assignment. According to the two necessary conditions, we propose a greedy iterative algorithm for jointly designed MRVQ with channel conditions, which depends on the channel only through several types of average channel error probabilities rather than the complete knowledge of the channel. Experiments show that MRVQ designed by the proposed algorithm significantly outperforms conventional MRVQ designed without channel information. By building an closed-form formula for the weighted EED with RIA, it also makes the computational complexity incurred during the performance analysis feasible. In comparison with MRVQ design for a fixed index assignment, the computation complexity for quantization design is significantly reduced by using random index assignment. In addition, simulations indicate that our proposed algorithm shows better robustness against channel mismatch than MRVQ design with a fixed index assignment, simply due to the nature of using only the average channel information. Therefore, we conclude that our proposed algorithm is more appropriate in both wireless communications and applications where the complete knowledge of the channel is hard to obtain. Furthermore, we propose two novel algorithms for MRVQ over broadcast channels. One aims to optimize the two corresponding quantizers at two layers alternatively and iteratively, and the other applies under the constraint that each encoding cell is convex and contains the reconstruction point. Finally, we analyze the asymptotic performance of weighted EED for the optimal joint MRVQ. The asymptotic result provides a theoretically achievable quantizer performance level and sheds light on the design of the optimal MRVQ over broadcast channel from a different aspect.