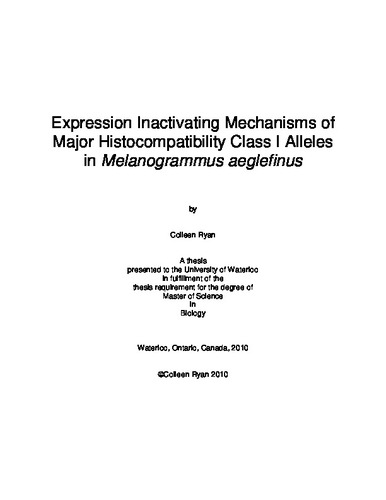 Melanogrammus aeglefinus, commonly known as haddock, is a commercially important marine fish species closely related to cod. Preliminary investigations into the immune function of this species has revealed several unique and interesting features, including an unusually high number of expressed alleles of Major Histocompatibility (MH) Class I genes. The goal of this project was to examine the sequences of alleles, including the untranslated regions, for potential regulatory mechanisms which may limit the number of alleles expressed to the point of functional molecules. Using a cDNA library from an individual haddock, a total of 22 unique alleles were isolated and sequenced, and three putative mechanisms for limiting expression were revealed. The first mechanism was the inversion of the open reading frame within the transcript. The second mechanism was the linking of the MH Class I transcript with the transcript of another gene. The third mechanism was non-classical substitutions at the nine amino acid residues involved in peptide anchoring. These three mechanisms represent novel ways of limiting expression and effectively reduced the number of alleles which could be expressed into functional classical MH Class I molecules.