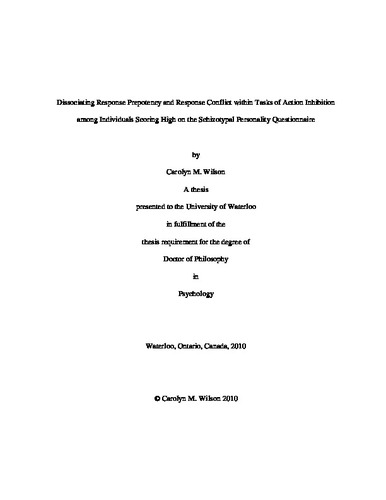 Theories embedded within evolutionary neurobiology offer useful frameworks within which to understand cognitive impairment in schizophrenia (SCZ). The current research invokes the Dual Trends Theory (DTT), an evolutionary model that posits that neural architecture develops along two separate pathways: the dorsal ‘archicortical’ trend and the ventral ‘paleocortical’ trend. Although various lines of research converge to suggest that SCZ is associated with dorsal trend impairment in the context of relative ventral trend sparing, one persistent inconsistency exists. Specifically, individuals with SCZ routinely show impairment on tasks of action inhibition (AI; the ability to inhibit a pre-planned movement), a function routinely shown to be mediated by the inferior frontal gyrus, a key structure of the ventral trend. Here we argue that conventional tasks of AI conflate AI per se with response conflict (CON) demands, a function shown to be mediated by the anterior cingulate cortex, a key structure of the dorsal trend. We define CON as any aspect of a task that increases the difficulty of deciphering or interpreting the meaning of task stimuli (e.g., greater perceptual similarity between imperative task stimuli). The current research administered novel AI tasks in order to independently examine increases in CON and increases in the prepotency to respond to a pre-planned movement (PREP; considered a more fundamental measure of AI). Consistent with study hypotheses, individuals with Schizoprenia-spectrum disorders (specifically schizotypy) failed to show compensatory response time (RT) slowing when confronted with increasing CON demands yet showed proportional RTs, relative to healthy control participants, as PREP demands increased. These findings were interpreted as reflecting impairment in their ability to detect and/or decipher CON. More broadly, these findings suggest that cognitive abnormalities in SCZ may represent disproportionately impaired dorsal trend circuitry.