Derivative Compressive Sampling with Application to Inverse Problems and Imaging 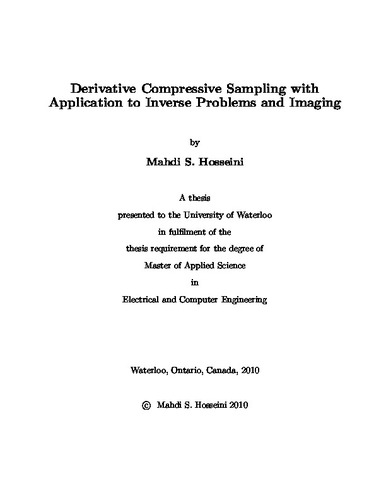 In many practical problems in applied sciences, the features of most interest cannot be observed directly, but have to be inferred from other, observable quantities. In particular, many important data acquisition devices provide an access to the measurement of the partial derivatives of a feature of interest rather than sensing its values in a direct way. In this case, the feature has to be recovered through integration which is known to be an ill-posed problem in the presence of noises. Moreover, the problem becomes even less trivial to solve when only a portion of a complete set of partial derivatives is available. In this case, the instability of numerical integration is further aggravated by the loss of information which is necessary to perform the reconstruction in a unique way. As formidable as it may seem, however, the above problem does have a solution in the case when the partial derivatives can be sparsely represented in the range of a linear transform. In this case, the derivatives can be recovered from their incomplete measurements using the theory of compressive sampling (aka compressed sensing), followed by reconstruction of the associated feature/object by means of a suitable integration method. It is known, however, that the overall performance of compressive sampling largely depends on the degree of sparsity of the signal representation, on the one hand, and on the degree of incompleteness of data, on the other hand. Moreover, the general rule is the sparser the signal representation is, the fewer measurements are needed to obtain a useful approximation of the true signal. Thus, one of the most important questions to be addressed in such a case would be of how much incomplete the data is allowed to be for the signal reconstruction to remain useful, and what additional constraints/information could be incorporated into the estimation process to improve the quality of reconstruction in the case of extremely under-sampled data. With these questions in mind, the present proposal introduces a way to augment the standard constraints of compressive sampling by additional information related to some natural properties of the signal to be recovered. In particular, in the case when the latter is defined to be the partial derivatives of a multidimensional signal (e.g. image), such additional information can be derived from some standard properties of the gradient operator. Consequently, the resulting scheme of derivative compressive sampling (DCS) is capable of reliably recovering the signals of interest from much fewer data samples as compared to the case of the standard CS. The signal recovery by means of DCS can be used to improve the performance of many important applications which include stereo imaging, interferometry, coherent optical tomography, and many others. In this proposal, we focus mainly on the application of DCS to the problem of phase unwrapping, whose solution is central to all the aforementioned applications. Specifically, it is shown both conceptually and experimentally that the DCS-based phase unwrapping outperforms a number of alternative approaches in terms of estimation accuracy. Finally, the proposal lists a number of research questions which need to be answered in order to attach strong theoretical guarantees to the practical success of DCS.