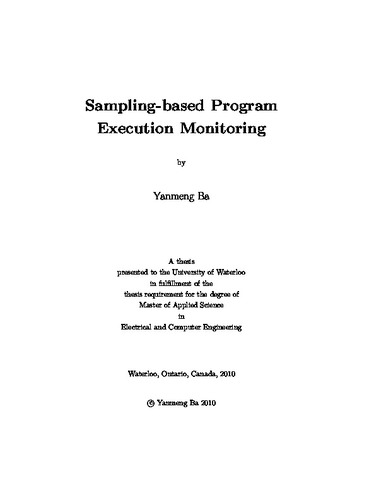 For its high overall cost during product development, program debugging is an important aspect of system development. Debugging is a hard and complex activity, especially in time-sensitive systems which have limited resources and demanding timing constraints. System tracing is a frequently used technique for debugging embedded systems. A specific use of system tracing is to monitor and debug control-flow problems in programs. However, it is difficult to implement because of the potentially high overhead it might introduce to the system and the changes which can occur to the system behaviour due to tracing. To solve the above problems, in this work, we present a sampling-based approach to program execution monitoring which specifically helps developers trace the program execution in time-sensitive systems such as real-time applications. We build the system model and propose three theorems which determine the sampling period or the optimal in different scenarios. We also design seven heuristics and an instrumentation framework to extend the sampling period which can reduce the monitoring overhead and achieve an optimal tradeoff between accuracy and overhead introduced by instrumentation. Using this monitoring framework, we can use the information extracted through sampling to reconstruct the system state and execution paths to locate the deviation. Based on the statistically significant data, we also model the trend of the sampling period with the instrumentation steps. Based on the modelling results, we devise a scheme for predicting the number of markers we need to reach a certain sampling period. Last, we build a tool chain to instrument and monitoring the software system and further prove the soundness of our approach.