Predicting the Effectiveness of Post-Weld Treatments Applied under Load 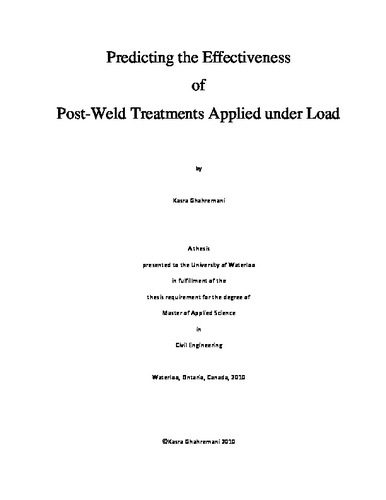 Existing steel bridges are subjected to both increasing traffic loads and natural aging, both are capable of causing severe durability problems. Dependable rehabilitation methods are attracting attention as the promising methods to enhance structural durability and/or structural performance. One possible rehabilitation method, for improving fatigue performance, is the use of residual stress-based post-weld treatments such as peening. A number of studies has been performed and it has been proven that residual stress-based treatments are an effective way of increasing the fatigue lives of newly built steel bridges, and even enhancing the fatigue performance of existing structures. Provisions have been developed to ensure the proper execution of peening and several codes have considered its beneficial effect in the fatigue design of welded structures. Various analytical approaches are used to predict the fatigue performance of welded structures and the beneficial effects of residual stress-based post-weld treatments. In most codes and recommendations, variations of the “S-N curve” approach are employed. Linear elastic fracture mechanics (LEFM) and strain-based fracture mechanics (SBFM) are widely accepted approaches for making more precise predictions of the treatment benefit. Cohesive zone fatigue models are also recently introduced for predicting fatigue crack growth in as-received and peened welds. Despite all the research conducted, there are still two main unanswered questions related to the application of peening treatments. First, it is claimed that peening can be more effective for civil structures where a considerable portion of the total applied stress is due to permanent loads and thus peening is applied under load. However, most of research done so far has studied effects peening prior to the introduction of the structural self weight. Secondly, considering the nature of these treatments, some concerns have been raised regarding their effectiveness under actual in-service loading conditions, as most of the reported test-based studies only demonstrated the fatigue performance improvement under constant amplitude tension-only loading conditions. The current study was undertaken to examine the fatigue performance of welds peened-under load and to determine the effectiveness of peening for improving the fatigue performance of welds subjected to realistic in-service loading conditions. Moreover, a previously developed strain-based fracture mechanics (SBFM) model for predicting fatigue performance of welded details under different loading and treatment conditions, and a previously developed damage-based cohesive zone model for steel specimens were evaluated and calibrated. Fatigue tests were conducted on welded steel specimens, simulating different loading and peening conditions. Dye penetrant was used to stain cracked specimens upon detection of cracks and a crack front marking loading scheme was used to study the crack front shape. The alternating current potential drop (ACPD) method was used for continuous crack growth monitoring for both as-welded and peened specimens under different loading schemes. It was observed that cracks propagated at different rates in specimens treated under load than in the normally peened and as-welded specimens. Material tests were also conducted to determine the mechanical properties of the steel base metal. Secondary effects of peening were investigated by microhardness measurements and weld toe measurements. A number of typical weld toe defects was also detected. Residual stress measurements showed a uniformly distributed tensile residual stress near the surface of the untreated specimen. Needle peening the specimen resulted in a significant change in the residual stress distribution through the specimen thickness. In all cases, peening resulted in a significant increase in the fatigue life. However, greater fatigue life improvements were observed in lower stress ranges. Of the specimens tested under constant amplitude loading, those peened under load experienced the largest fatigue lives. For the variable amplitude loading tests, the untreated specimens had mean fatigue lives slightly less than observed in the constant amplitude tests. A previously developed strain-based fracture mechanics (SBFM) model was used to estimate analytically the effectiveness of peening applied to welded details. The model was able to predict the fatigue lives for both the as-welded and peened specimens for all loading conditions. It correctly estimated the additional benefit of peening when applied under a relatively small prestress level. The model predictions were used to estimate the additional benefit of peening under load. A previously developed cohesive zone model was introduced and applied to predict fatigue crack growth in a weld detail under cyclic loading. Fatigue tests were simulated using the finite element program ABAQUS. The material parameters α and β were chosen by iteration. Other fatigue tests were simulated and the model correctly predicted the effects of varying the applied stress range, R ratio, and residual stress level on the fatigue behaviour.