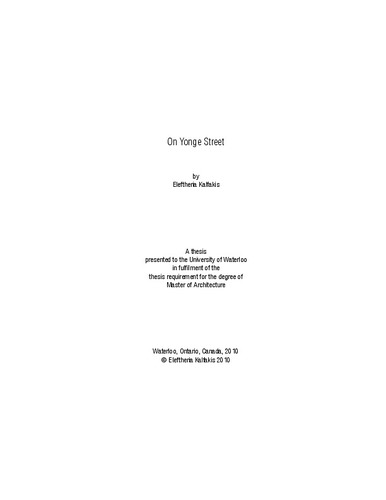 Yonge Street is a unique urban resource for the City of Toronto. It acts as the central nervous system uniting local, suburban and out-of-town populations with both surface and underground networks. It has transformed to adapt to fluctuating cultural, social climates and urban development projects. Many fragments can be found both within this major thoroughfare’s physical streetscape and in the hearts of many Torontonians. The largely generic street fabric found in the stretch between Queen and Bloor may lack in architectural integrity, but offers a spectrum of establishments that exhibit the diversity found in Toronto. The tension between these assorted venues is what gives the street both value and complexity despite their individual architectural modesty. It is a casual place in the city that speaks to the everyday citizen. It’s eclectic and sometimes tawdry charm raises mixed reviews by locals and often confuses city bureaucrats. Many development strategies have been initiated in order to give the street a homogenized image and a public face. However, it is in its informal candidness where its value rests. This thesis claims that Yonge Street is a democratic urban platform built upon complex layers. The diverse, overlapping and kinetic happenings felt on the street are both its strength and weakness. The rich experience is difficult to articulate using traditional urban design analysis. This thesis offers a new version of portraiture that seeks to illustrate the spirit of Yonge Street. Using unconventional mapping methods and visualisations, it will render qualities often difficult to express. Five portraits of Yonge Street are presented, inspired by five buildings: the Yonge-Bloor Subway Station, Sam the Record Man, Zanzibar Tavern, the Yonge Street Mission and Yonge-Dundas Square. Each describes one of Yonge Street’s many faces using a collection of subjective mapping exercises to portray a different character present on the street. Urban developments that add to Yonge Street, or allow it to evolve as an eclectic social condenser can only be created when the existing phenomena embedded in its fabric is understood. In order to provoke a new interpretation of Yonge Street, the thesis synthesizes the findings of these mappings into a collection of street art proposals. The interventions presented act as agents directed towards a new engagement and understanding of Yonge Street, framing it as an irreplaceable resource for the citizens Toronto.